Smoking while breastfeeding: implications for mom and baby

Pregnancy, the birth of a baby and its feeding with breast milk are significant reasons to say goodbye to such a bad habit as smoking. It is great if a woman manages to safely get rid of tobacco dependence even before the birth of a child. Unfortunately, this is not always the case, and the nursing mother is faced with a serious dilemma: continue breastfeeding or transfer the baby to a mixture?

Is smoking possible when breastfeeding? What are the risks and consequences of each choice? 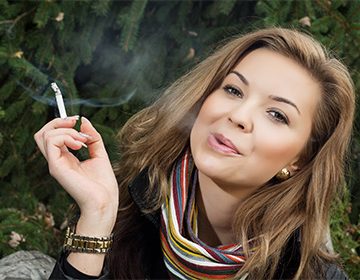 To overcome the addictive addictions takes time. Many can be difficult to decide on such a step.

However, a nursing mother should understand that smoking while breastfeeding is possible, but it has certain negative consequences for lactation and the health of the baby. Therefore, each woman should be able to make an informed choice in favor of a particular type of feeding, having previously studied different scenarios of events.

In this regard, a selection of facts from scientific studies on the effect of nicotine on the health of infants will help.

This article does not in any way justify smoking a mother during lactation. Of course, the priority is the ideal outcome of the situation – a complete cessation of smoking and continued breastfeeding. Meanwhile, in life often have to look for compromise options.

And in such difficult circumstances, it is very important for a nursing mother to feel supported and to have access to reliable and reasonable information.

To begin with, what do people think about smoking during lactation?

Below are the most pressing questions about smoking during lactation and scientifically based questions on them.

According to the international site-reference book on the compatibility of drugs and breastfeeding “E-lactation”, nicotine has the penultimate degree of risk. This means that the tandem “smoking and lactation” is valid, but with possible serious consequences for the condition of the child.

Tobacco smoking mother has a cumulative effect on the well-being of the child. This increases the likelihood of sudden death syndrome (SIDS) in the first year of life.

Moreover, in passive smoking, the concentration of nicotine in the baby’s blood is higher than when it is received through mother’s milk.

Thus, smoking while breastfeeding can indeed have dangerous consequences for an infant. However, if a smoking woman thinks about stopping breastfeeding in favor of the mixture, she puts her child at even greater risk. 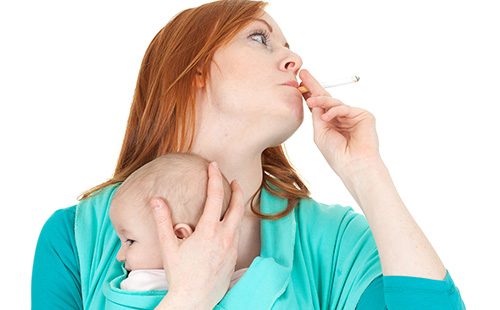 Women who find it difficult to give up their nicotine addiction can learn to combine breastfeeding and smoking as safely as possible. When organizing feedings, they need to follow certain rules, otherwise the harmful effects of tobacco on the child will be higher:

Smoking moms often ask a question about how long after smoking you can feed your baby. It is better to apply it before you go smoking, or two or three hours after that.

Smoking cigarettes is very addictive, so it is not easy to say goodbye to this habit. If a nursing mother is seriously looking for a positive result, she can benefit from safer low nicotine aids.

One of the last stages of parting with smoking can be an electronic cigarette without nicotine. It supports the illusion of smoking, but when choosing a non-nicotine fluid, it does not adversely affect the mother and baby.

Sometimes you can find reviews that hookah is less harmful than cigarettes. Typically, this option involves the use of tobacco blends, which include nicotine.

The harm of such a substitute depends on the strength of the mixture, as well as the presence of various impurities in it. Yet in the process of smoking a hookah, even if it is without tobacco, combustion products and carcinogens are released that are not beneficial for the body of a nursing mother. In addition, for one hookah smoking session there is a risk of getting a larger dose of nicotine than when smoking a regular cigarette.

This is true even for mixtures with a low concentration of nicotine. Therefore, after smoking a hookah, it is worth adhering to the same safety rules as in the situation with cigarettes.

Can a nursing mother smoke? The answer to this question can only give yourself a woman. From the point of view of science, smoking and breastfeeding can be combined, but the harm to the health of the infant does not disappear.

If a mother is unable to say goodbye to cigarettes, breastfeeding will partially protect her baby from the negative effects of smoking. This is a more rational choice than switching to artificial mixtures while maintaining the habit of smoking.

My child can not smell at all. Only grandfather smokes surrounded (not with him, of course, but there is a smell). So the son as the grandfather will see – so in tears.

They are very sensitive to such sharp smells.

Children of smoking mothers are more restless and capricious! You can read about it in the Internet.

There is an example: my friend fed for about a year and at the same time smoked and even sipped beer, so constantly complained that her daughter did not sleep at night, yelling for sleep doesn’t give and in general is capricious in life. I always thought about her complaints, still …

I smoke. Slightly true, but I smoke.

Only after feeding. Every night I fall asleep with the thought that I do not smoke from tomorrow.

Does not work. Already I do not know what to do.

It is urgent to throw. It’s harmful.

I admit, smoked during pregnancy, shame so far! But after seeing my son, I never took a cigarette in my hands!

How disgusting it seems to me to be stoned to approach my prince … I really want to smoke! When we leave Titia, I’ll smoke.

A child of smoking parents is usually weak, nervous, often sick, poorly tolerates various diseases, sometimes his skin and eyesight is affected, in especially severe cases there are deviations in mental development. Therefore, a pregnant woman and a mother who is breastfeeding a baby should not smoke, even so …

Stars estimate the marital compatibility of the woman-Virgo and the man-Virgo at 100%. Their union ...