Unprepared for children, the playground inspires frank horror: everyone there runs somewhere, collides, falls … and runs again. Even professional athletes envy inexhaustible children’s energy and endurance. So why not put this energy on a peaceful course? Sports contests and games – a great way to take children for a long time!

Competition is great for a hike or picnic in the forest. Age of participants from 4 years to infinity.

Preparation: First you need to tighten the rope between the trees, and, do it several times at different heights.

The essence of the game: Children divided into two teams. After that, one participant from each team is blindfolded. Task: get over the web without hitting it. The rest of the team members suggest.

You will need: Rope, trees.

Over bumps over bumps

The essence of the game: Children need to be divided into two teams. Draw circles on the ground (at equal distance from each other, diameter about one meter). Children hold hands, their task – to move over the bumps on the other side. Hands can not break. Thus, the first player must wait until all the players jump over to him and go on. This game rallies the team. 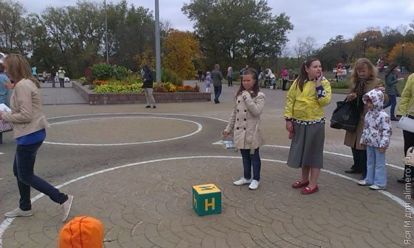 The essence of the game: Children are divided into two teams. The turnips sit on the chairs a few meters from the main team. At the signal of the lead, the first player of each team (grandfather) runs to the chair, runs around it, returns to the team. The following player clings to the waist of grandfathers grandmother, and they already run together, running around the chair. This continues until the case reaches the mouse (if there are more players, then the chain can be continued with other pets). The turnip should cling to the waist of the mouse and return to the place with the main team.

You will need: Two chairs.

This competition is suitable for children from 4 years. Before the competition it is necessary to practice so that the children understand how that or other beast moves.

Sports games and competitions a huge amount. If you have enough time and have the desire, then you can organize real Olympic games, with prizes and a mandatory climbing on a pedestal.