Often parents prohibit children from what is allowed and allowed, and, at times, allow what should be prohibited. Such paradoxes are common. Sometimes they destroy the trust relationship that should be between children and parents.

The basis of the relationship between children and parents should be love and trust. But this, ideally, is what parents are trying to strive for, what they learn as they grow up with their children. Trust must be based on the ability of the child and the adult to listen and hear each other. Should a child obey adults without question or does he have a choice?

Once on the playground

I’ll tell you about the usual situation. I once walked with my twins on the playground. The weather was cloudy, but quite suitable for a walk.

On the playground there was a bowl filled with water. It’s hard to imagine a child who could pass by the temptation to wash his truck or take water in a bucket.

At first I forbade children to approach the water, arguing that the children would be soaked and dirty (although I thought to myself that my basic ban was related to what I was going to go to the store after the walk, which would be impossible if the children were wet) .

However, the games with water are fascinating and, in the end, after another request to get a little bit of water, I lost. Another boy of the same age was walking with us, with his mother, who turned out to be adamant in terms of prohibition to play with water.

It is clear that the child did not tolerate the ban for long, especially when other children draw water with pleasure. But the boy’s mother, without ceasing to pull him down, pointing loudly at his wet trousers, rewarding him with words – disobedient, dirty, nasty.

As a result, I got it, because I allowed the children to play with water. Unable to bear it, she got up from the bench and went to her son.

Then the situation unfolded as follows – the mother independently collected all the toys, grabbed her son by the hand and dragged him from the playground. Needless to say, the child began to rest and cry, but the forces were unequal.

We doguli and returned home. Of course, the children were wet, indecently dirty, but contented. I do not know who is right in this situation: I, that gave myself to persuade the children, and went on about their desires, or my mother, who insisted on her to the last.

And where is the truth?

Will my weakness turn out that the children will completely stop listening to me? Should the child unconditionally fulfill the instructions of the parents or does he still have the right to choose? 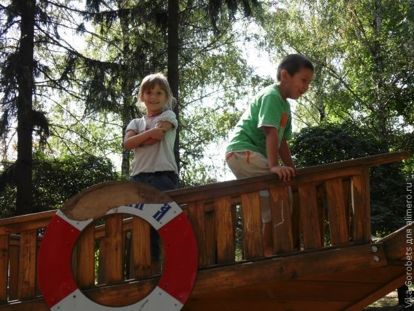 Reflecting on such a banal situation, I nevertheless came to the conclusion that we often act to please our emotions and desires, rather than reason. What did the principal mom achieve, apart from the hysteria of the child, her irritation and the spoiled day?

I do not say that a child should not obey, but obedience should be reasonable and built on the same principles of prudence, and not our every minute emotions.

What do you think?