Не пропусти
Главная 7 Preschoolers 7 As my daughter and I visited the water museum, preschoolers

As my daughter and I visited the water museum, preschoolers

I do not remember where I read it, but I learned it clearly – it is important for a child at preschool age to get as many impressions as possible. Therefore, she outlined an approximate program for the next couple of months with a visit to various interesting places. This weekend we were at the Museum of Water.
We planned to go there a long time ago – many acquaintances told about the visit with delight. In theory, the museum is organized with an educational purpose. Not only to tell about the formation of the water supply system in the city, but also about the state of the water balance of the planet, problems and ways to overcome them.

And, of course, that the tour was interesting to all. Many exposures have been invented that are incredibly interesting for both children and adults. I, to my shame, listened to a lot – ran to click the camera, also unsuccessfully. But still, some information frankly surprised me. Although, if you think about it, these are quite obvious things.

1. It was surprising to realize that the Dnieper originates in Russia, then passes through Belarus. Moreover, it is the fourth longest river in Europe. You walk by, you look at it almost every day, but you don’t even think about such nuances. Now I look at the Dnieper with pride.

2. It turns out that the water for the water utility is taken not only from the Dnieper, but also from artesian wells. For some reason, I was sure that they are used only for pump rooms.

3. I have never thought about it before, but, in fact, we use drinking water in the bathroom. And the biggest expense falls on the toilet tank in the toilet. Of course, now the water in the tap can be called drinking with great stretch. But 5-10 years ago we drank and poured the same water. Unforgivable extravagance! 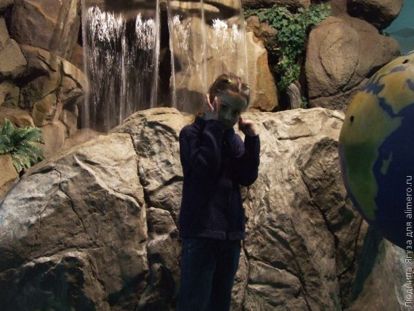 The child is delighted

The main purpose of the visit, we also reached – the child was in indescribable delight. Of course, not from what he heard.

1. In one of the spans on the floor was a hologram of the bottom of the river: pebbles under water and circles on the water, as if it was raining. For some reason, the daughter decided that the water was trembling due to the fact that she runs along it – joy was just the sea.

2. Imitation of a thunderstorm with a shower she did not like at all – it was too loud. So she went with closed ears, admiring the waterfall and the geyser.

3. A sandbox with water is generally a dream of any child. Inside there are small fountains, from which water flows, if you press a special button. While it is pouring, it is possible to lay a channel for the river on the sand with a children’s scoop.

4. The best fun for everyone – soap bubbles! And they were let out with the help of plastic beaters for carpets. It turned out huge bubbles. Then another child was put in a basin and with the help of a hoop they made a soap bubble around her. Conversations were in the garden all day!

5. An aquarium with carps is an amazing sight. You could bring your hand to the water, as if you were going to feed them, and they immediately swam up and circled around. Some even stuck their heads out and, like domestic animals, rubbed hands together. Impressions that a child that mom!

2018-11-01
admin
Предыдущий The Weekend Events All Parents Recognise
Следующий How we chose Masha and the circle, preschoolers