Circle on the neck for swimming: pros and cons, kids

For the first time about the inflatable circle, which is fixed on the neck of the infant and thanks to which it swims independently, I heard when the youngest daughter was born. Since I am obsessed with swimming and I want my children almost from birth to know all the delights of staying in the water, I decided to buy it.

The inflatable circle for babies looks like a horseshoe. On the one hand, he has a small groove in which the baby’s chin is placed, and behind the special velcro, thanks to which this device does not unfasten.

Buy a circle for infants from 1 to 6 months. Usually used at home in a large bath. I remember how while I was still pregnant, I watched videos on the Internet with my eldest daughter, and we laughed to tears over the babies who swam in such a circle.

No words, the device is really convenient for parents. All mothers know how hard it is to bathe the baby in the first months, you have to bend in three deaths and constantly monitor that the child does not take a sip of water.

In the same circle, babies are in free swimming. They hang out in the water, pick up the legs and arms, push off from the side and generally behave very actively, which of course is very useful for their physical development. It is also possible to wash the child without difficulty, because both hands are free for the mother. 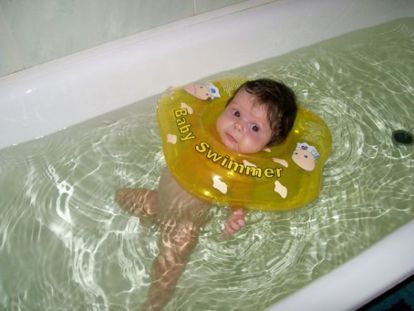 As follows from the above advantages, such a circle is convenient primarily for parents, but for the child, the benefits of the device turned out to be doubtful. When I decided to discuss this issue with a neurologist, she waved her hands at me and said that you can only use it for 8 months, but usually these kids can no longer swim in the bathroom, as they become too big for her.

In addition, swimming in such a circle gives too much load on the spine, and it is also contraindicated for children who have a strong or opposite weak muscle tone or have neck problems.

Before talking with the doctor, we still managed to acquire such a circle and even bathed in it a couple of times. However, when it came time to fasten it around the neck of the child, I was covered with cold sweat, since it is not so easy to do this. When the child is one month old, he still holds his head badly, he cannot be planted, and the neck itself is not visible in the folds!

I called my eldest daughter to help, but she was also afraid to hurt my sister. In the bath, the baby seemed to like to swim, but after consulting with the doctor, I realized that it would be better for us to wait until the baby gets stronger and enroll in a children’s pool with an experienced instructor and not tempt fate.

Did you use such an inflatable circle?

2018-12-21
admin
Предыдущий Whims of the child: how to react and how to deal with the vagaries of a child up to a year
Следующий Makeup for eyes with eyelids drooping, cosmetics and beauty