Onion Husk for hair, about hair

In my youth I could boast of my fluffy thick hair. But over the years, the situation began to change for the worse.

In grade 11, my hair began to fall out badly. On the comb, they remained beams. Of course, hair loss was associated with stress due to final exams. In the summer, the situation improved. Eating fresh fruits and vegetables has done its job. I washed my head a couple of times with a decoction of onion peel, and forgot about this great way to strengthen hair.

During the first pregnancy, I noticed that my hair was even better than before. Noted this fact in every pregnancy. But after the birth every time I had to get a haircut. Hair climbed mercilessly. They were everywhere: on a hairbrush, towel, clothes, and even on the plate of her husband. How many had to listen Wear a kerchief when you have to cook, otherwise shave!

Of course, these were comic threats, but the time has come to really think about the health of hair. Then I remembered the onion peel. I use two recipes based on it. One – to strengthen the hair, the other – to enhance growth.

A recipe for strengthening hair

I take 3 handfuls of onion peel, rinse it in a shower bowl and put it in a saucepan. It is advisable for these purposes to take an old saucepan, because of the husk left pink walls. Husk by eye is poured and cooked over low heat until the broth is bright red in color, as for coloring Easter eggs.

Broth rinse hair after each shampooing, keep it in the fridge. I do not rinse hair after broth. On a white towel may remain traces of onion broth. Hair becomes much softer and easier to comb.

Then I learned another recipe based on onion peel and vodka. Husk thoroughly washed in drushlag, tightly folded in a liter jar to the top and pour vodka. After a few days you can use the product. 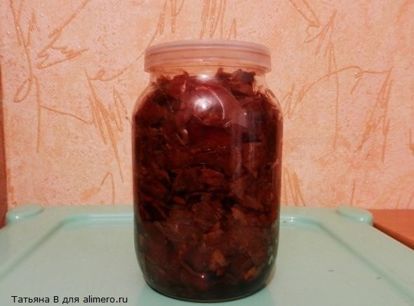 A piece of gauze moisten in tincture and lubricate the hair roots. The hair itself along the entire length should not be greased. Alcohol dries, and the hair is to anything (except for greasy hair). But the hair roots are fatter and they are not afraid of alcohol.

Then I cover my hair with polyethylene and wrap it with a handkerchief. The head immediately becomes warm. So I hatch about an hour and a half, you can and hour. During the procedure, it is better to wear an old bathrobe or tie a neck with a scarf. The adjustment leaks and leaves dark marks on the clothes.

Then I wash my head with ordinary shampoo, at the end I rinse it with cool water. The hair the next day is surprisingly light and does not get tangled when combing. Of course, for a tangible effect will require several procedures. I wash my head 2 times a week: 1 time with decoction, another time with alcohol tincture.

Has the hair color changed? He is naturally blond in nature and I did not notice any special changes. But on the comb now hair less. And if the husband gets the hair in a bowl of soup, then it’s not mine, but the omnipresent cat (joke).

Sometimes my head daughters broth husk. The older girl’s hair was always weak. I had to use alcohol tincture. The effect is obvious. Her remedy helped her faster, the young body copes with problems better, you only need to pay attention a little.

2018-12-05
admin
Предыдущий How do I use milk to lose weight, how to become slim
Следующий How to keep up with modern children, preschoolers

Care for hair extensions, about hair

Care for curly hair, about hair

Care for thick hair, about hair

Hair care after perm, about hair

Hair care in the summer, about hair

Acceleration of hair growth, about hair

Do you know how to wash your hair, about hair

Vinegar for hair, about hair

Herbs for hair, about hair

Thermal protection for hair, about hair

Serum for dry hair, about hair

Surely every girl heard about dry shampoos. They are designed to quickly refresh hair, when ...

I did not have dandruff until I gave birth. It can be seen, my body ...

Haircuts with a long bang 26 ideas about hair

Today I again want to devote a topic to haircuts. Namely – options with a ...

Haircuts for medium hair, about hair

Haircuts for medium hair are considered the most convenient and versatile. I can confirm this ...

Every year, short haircuts are becoming increasingly popular among the fair sex. I understand them ...

Haircuts for long hair, about hair

I once had long hair, but I cut them off after my son was born. ...

Any girl would agree with me that it is difficult to opt for any one ...

Choosing a hairstyle for women is always a hot issue. After all, we love so ...

Haircuts for fine hair, about hair

In my childhood I had very long hair, but they never differed in density. That ...

Haircuts for an oval face, about hair

The oval face shape is the most versatile. This fact is recognized by absolutely all ...

Haircuts for curly hair, about hair

Curly hair from nature are found, but quite rare. Their owners often use irons for ...

Haircuts for a round face, about hair

All girls love to change their style and image, hair color and haircut. In order ...

Short haircuts for women are very popular. They are comfortable to wear, suitable for many, ...

Haircut ladder with bangs on the hair

Haircut ladder with bangs enjoys great popularity among women. This is not surprising, since it ...

Haircut bob with bangs, about hair

Kare – my favorite haircut. It is simple to pack, and always looks fresh, fashionable ...

Haircut with an elongation, about hair

The bob with lengthening is a haircut that has not lost its popularity for several ...

Quite a popular procedure. But it is interesting, is it really useful to cut with ...

Haircut bob does not go out of fashion for several years in a row. It ...

Should I believe expensive shampoos, about hair

Shampoo – a mandatory resident of most bathrooms. After all, absolutely all hair needs cleansing, ...

Means for strengthening hair at home, about hair

My friend, who works as a pharmacist, often shares her know-how from her regular customers. ...

I want to share with you my hair care methods, maybe someone will find something ...

Today I want to tell all the participants of Alimero my impressions of the brand ...

By the New Year, I received many gifts. Most of them are cosmetics. It seems ...