Не пропусти
Главная 7 Child development 7 Where is my spoon?

Where is my spoon? 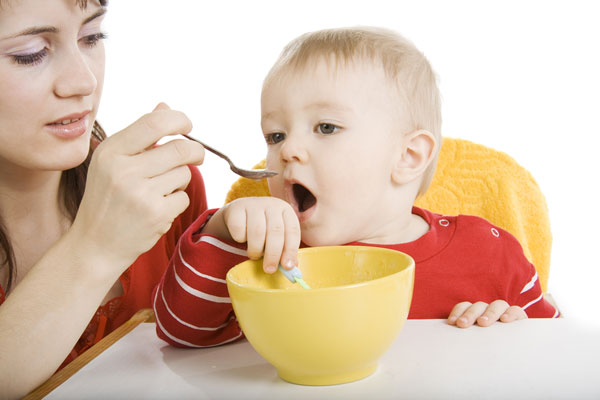 Some resolutely pull the spoon from the hands of mom, others begin to grab food with their hands, not paying attention to your protests. In any case, the child makes it clear that he now wants to act independently at the dinner table.

And this means that the times when you calmly fed the baby yourself have passed.

In most cases, children do not eat at the common table, but alone with their mother. This allows her to first focus on feeding her son or daughter, and then in a relaxed atmosphere to eat herself.

And in our rushing age, many women prefer the child to swallow everything as soon as possible – and this is the end of it. It is clear that when his hand begins to reach for a spoon, my mother does not feel much excitement.

Some mothers are very annoyed that the child drops food on the table, soiling himself and everything around him. But, no matter how nervous you are, you do not need to scold the kid for it. Better feed him yourself.

However, if the kid seriously decided to do without help at the table, he would begin to act up and refuse to eat: he would not want to open his mouth, he would turn away, spit, grab mashed potatoes with his hands. It is better to start learning immediately, which in any case will be long. Mom needs to be tolerant of manifestations of carelessness on the part of the child.

However, we must remember that dinner should not last more than half an hour, and even more so generate quarrels.

Children begin to show an early desire to eat without help. If the parents watch over the child tightly, he will show autonomy a little later, and if he is given freedom, he begins to demand his own earlier, and more often.

In families where parents and children are accustomed to have dinner together, the child will more easily learn how to manage the table alone, since he has the opportunity to watch and emulate adults.

It is most convenient to start training “four hands” with two spoons: one for the baby, the other for the mother. An inquisitive little man will spank the mash with a spoon, smear it around the edges of the plate and drop it on the table, try to bring it to his mouth by his own … And even if he succeeds in bringing some portion of the dinner to the mouth, his mother should continue to feed him from her spoon . Because otherwise, a tasty vegetable puree can be completely on the table, “confused” on the way from the plate to the mouth.

After all, this road is long, and many “traps” are set on it.

Difficulties begin with a plate already. Filling a spoon is not as easy as it seems at first glance. Almost every time the child turns her “face” down.

After he makes several unsuccessful attempts to pick up the food, the mother should show him that the spoon has “face” and “wrong side” and that it can be filled only if you hold it in a certain position. Proud of this discovery, the child dips the spoon into the plate and takes it out … empty. Learning to “rake in” with a spoon in a plate is quite difficult.

At first, the child fills the spoon by simply dipping it into the plate. From here a conclusion: offer him a capacity not wide, but rather deep and filled to the brim.

And puree at the same time should be thick enough. 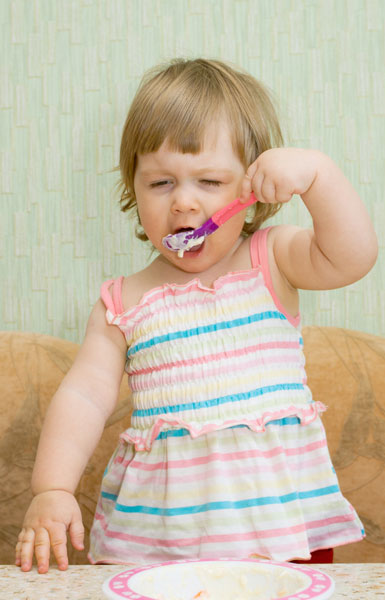 Ahead is a long way of the spoon from the plate to the mouth. The kid tries to keep her as even as possible, but she does not listen to him. He quickly loses his patience and begins to wield his hands.

When the food is cut into slices, this method is still acceptable, but, if we are talking about, for example, yogurt, it is a disaster. Therefore, it is better not to allow the child to act in this way.

But now our student takes the spoon again and this time successfully fills it – himself or with the help of his mother. But here is the mouth! He has yet to find.

Up to 16 months of age, a child has a very rough idea about the structure of his body. Before you get a spoon in his mouth, he will poke it in the chin, nose, cheeks.

To assess the ability of the child, ask him to touch his fingertip to the tip of the nose – he will do it with difficulty. And while eating, he still needs to take into account the length of the spoon – a very difficult task for the brain of a little man.

Spoon approaches lips. And again a hitch: the mouth is closed.

It is difficult for a small child to coordinate two dissimilar movements. When the mother feeds the baby, she always waits for a while until he opens her mouth.

But at the first independent attempts he still does not have a reflex to open his mouth simultaneously with the presentation of a spoon. As a result, mashed potatoes spread over the lips.

It remains only to lick and try again.

10 months. The first attempts to pick up a spoon.

The child plays with the plate and knocks on it, but is not yet ready to eat independently.

12 months He mimics the movement of the consumer, but very roughly, and he rarely succeeds.

16 months. The kid can bring a spoon to his mouth, but due to lack of coordination of movements often drops mashed potatoes on his bib.

18 months. The child is capable of precise movements, rarely misses his mouth and gets dirty less and less.

2 years. He is able to eat independently.

If the child wants to return to the previous order of things for a while and asks his mother to feed him, do not take it as a departure from the goal. The kid wants to take a breath before making a new step.

Child development is not linear. It is important to be able to appreciate the efforts of the child, even if they did not lead to success.

The child doesn’t want to eat by itself for too long? Often this is due to the reluctance to grow up.

Maybe mom just got another baby. It is possible that the mother herself does not want the baby to grow up.

Children subtly feel such things, unconsciously try to “respond” to them and remain in a dependent position. Perhaps the child is afraid that he will be given less attention.

Show him the benefits of growing up.