Не пропусти
Главная 7 Child development 7 Give me a spoon!

Give me a spoon! 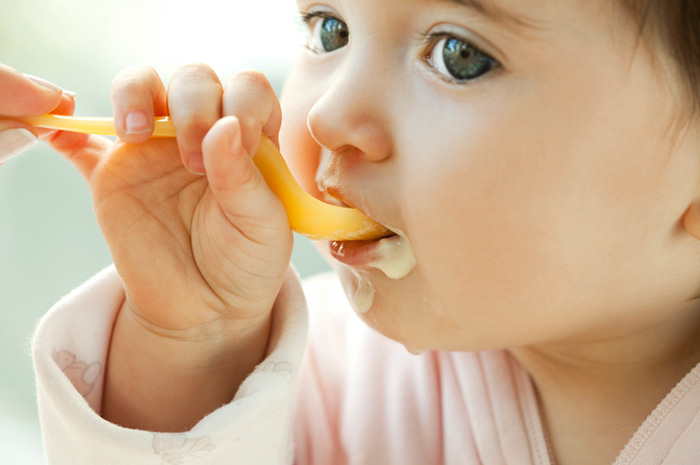 As a rule, the desire to independently wield a spoon appears months to 10. If the parents over-care for the child or are too supportive of accuracy, then a little later, if they give more freedom, then a little earlier. In families where parents and children are used to having dinner together, it is easier for children to learn how to manage the table alone — an example is always before their eyes.

In any case, it is necessary to prepare for the fact that cereal and mashed potatoes will fall not only in the mouth. And here it is important to show patience and calm attitude to temporary negligence.

1) It is better to start training “four hands” with two spoons: one for the baby, one for the mother. Inquisitive little man will spank the spoon on the mash, smear on a plate, drop, trying to bring to his mouth. Of course, some part of the dinner will get to its intended purpose, but the big one will remain on the table, on the floor, in the hair … And you, meanwhile, without losing composure, continue to feed him with your spoon.

Thus, he will not go hungry and will gradually improve his skills. Filling a spoon is not so easy.

Children usually turn her face down. Show him that you can fill a spoon only if you hold it in a certain position.

So he understood how to dip it correctly, but at the same time removes it empty. Scoop food with a spoon for the crumbs of this age is not an easy task.

His plate should not be very wide, but deep, and mashed thick.

2) At this stage, forks are strictly prohibited. It is also not easy to hold a spoon in a small pen, after a time the eater will fall into any part of the face except the mouth. And the movements of the kids are harsh and hasty, their gestures are difficult to control – the nervous system is not mature enough for this.

Play with your baby – where is his nose, mouth, eyes, let him show with his finger. And mom, dad, toy dog, ridiculous big-eyed clown? As soon as he begins to do it with confidence, it will become easier for him to get into the mouth with a spoon.

But another difficulty awaits: do not be surprised if your mouth is closed at first. It’s not easy for young children to coordinate two different movements. Too much effort goes into bringing the spoon to the mouth – but opening the mouth is difficult.

You can help him, gently saying, time after time calling the procedure: “Scoop porridge, and now open your mouth.”

3) Do not allow often and in many parts to eat with your hands. When a child wants to be independent, he quickly loses his patience – and he has a desire to throw a spoon and continue to eat with his hands.

If the food is sliced, this option is sometimes acceptable. But the puree or porridge to eat is not worth it.

It is important to instill the skills of cultural behavior at the table from infancy, based, of course, on the age characteristics of the child.

4) Do not rush things. Having practiced with a spoon for a couple of days, the baby can throw it away, as they say, far away and for a long time (sometimes for several weeks).

Do not take this as a departure from the goal. If he wants his mom to feed him, go ahead. The baby needs to take a breath before the next jerk.

Child development always involves short periods of regression. It is important to be able to evaluate the efforts of the child, even if they did not lead to immediate success.

The first attempts to take a spoon in hand. The child plays with cutlery and dishes, but is not trying to eat on his own.

Simulates actions, but approximately, any success at this stage is rather an accident.

Able to bring a spoon to his mouth, but due to lack of coordination, food often drops.

Capable of accurate movement, rarely misses and gets less dirty.

Is able to eat independently.

If you do not eat without help, you should consult with experts.

Holds a spoon and fork, as an adult.

Bib. Needs as long as possible. They should be a few pieces, one for a meal may not be enough.

It is better that from the front side it is made of terry cloth, and of the back side is waterproof. Plastic bibs with a pocket are very comfortable, they are easy to wash, but the edges adjacent to the neck can be a bit harsh.

Plate. Need a deep, not too wide, made of plastic, with a non-slip bottom.

Spoon. Any suitable, no more than a tea in size.

If the child incorrectly orients it in space, it is possible to offer a spoon twisted along the axis at first.

2019-11-17
admin
Предыдущий I can not love the son of his bride
Следующий From love to hate and back: the stages of development of feelings in a child