HAPPY PARENTS Alice, you changed several professions: you were a ballet dancer, a choreographer, you are now acting in films and playing in a theater. And who wanted to be in childhood? ALICE KHAZANOVA Yes, it happened to me that a lot in my life really had to start all over again.

Like a cat with its nine lives … And from the age of 5 I dreamed of being only a ballerina, and no one else. And very hard to achieve this.

You know, now, when I myself had children, I remember myself then and am surprised: what a diligent girl was! And before my acting, the way was not yet close.

Choreographic School with a red diploma, then the Bolshoi Theater. What more could you want?

And you are leaving again to study, now to America. What for?

OH. The first years after graduating from college, they always become a test for young ballerinas, because in the theater everything has to start over again.

Climb the steps from the corps de ballet to the soloist and prove – sometimes for years! – that you are a good ballerina. But such a great practice. Soon I realized that I was not developing, there was no creative growth.

On this wave, I took academic leave and went to New York for a year, to a dance school, where I studied modern and other techniques. Returning back, she worked at the Bolshoi, until she got injured. I left the theater.

She went nowhere, and in fact – into family life, because she just got married.

S.R. And immediately there were children?

OH. No, not immediately. Although it was at this time, at 24, I suddenly wanted children.

But not everything was so simple. It took me just four very difficult years that taught me a lot. And the way life is organized, and what women have to worry about when they really want to have a baby, but they fail.

For a woman, this is a very serious story. And again, everything teaches us patience.

We all want to get it right away. And suddenly – the most important thing fails …

S.R. And why do you think it happened later?

OH. It must be fate. But first there were health problems.

There was, for example, a rare reaction to a drug inherent in an extremely small number of women. She lay in such a state at a hospital in Geneva and understood that the doctors simply did not know what to do with me.

I am for them – an unusual case from the textbook. And this episode, and everything else that I experienced in four years, in my opinion, became a kind of test – how badly I want a child.

I wanted very much. And suddenly, once — quite independently of medicine — she got pregnant! My first daughter was born, who was named Mina, in honor of her husband’s grandmother.

Mina is now 6 years old. I spent a year at home with her (then we lived in France) and was a classic crazy mother.

And when Mine was one year old, I realized that I had to go back to work, because my character was spoiled. 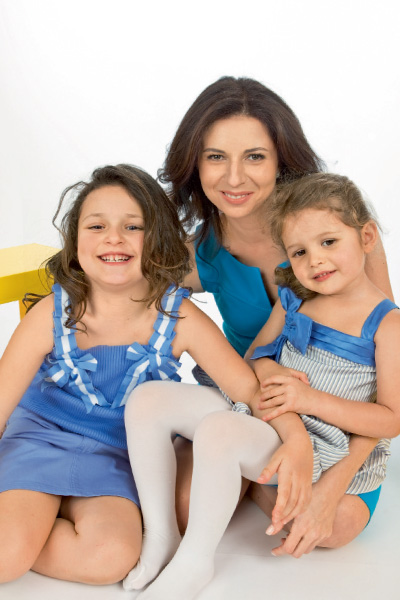 S.R. Do you think it’s better for kids when mom works?

OH. It seems to me that it is better for children when mom has a good mood and kind character. I really respect women self-sufficient in the family.

But I can’t do that. Therefore, I am torn between family and work. And now especially when daughter Eva was born …

S.R. Were there any preferences when waiting for the second child?

And did not hope. In our family, everyone has long forgotten what it means to want a boy.

The fact is that in our fourth generation only girls are born. My mother’s grandmother had five children, and all the girls.

And then these girls gave birth to girls too, and those gave birth to their girls. But just recently this miracle happened – my cousin finally had a boy!

And, of course, you can imagine the attitude of all our women towards him.

S.R. And how did Mina perceive the appearance of Eva? OH.

Mina was three and a half years old when I brought a baby from the hospital. The older sister saw a younger one, so small, pretty, even with her hair. The problems began when the elder saw that the child was growing up, beginning to crawl and take her things.

Nothing can be done about it, and most importantly – it will always be like this. There was, of course, a moment of jealousy.

S.R. But how to help children survive this jealousy?

OH. It seems to me that each child should be given a separate time devoted to him and only him. And no matter how to spend it – on the playground or in the bookstore, but it should be only separately, only together.

And, in my opinion, the quality of communication is more important than quantity.

S.R. Are your daughters as goal-oriented as you are?

OH. First, there are two of them, and they are very different. I was alone.

And when there are two children in a family, it’s just another galaxy. They have different characters, different temperaments. Mina was born with a very loud voice, like an opera singer.

Eva after birth only slept and ate. Mina was afraid of some things for a long time. Eva before the age of three was not afraid of anything at all.

A sense of fear came to her later.

S.R. How does the famous grandfather, Gennady Khazanov, raise granddaughters?

Recently I took them to Polunin, and Eva was so frightened there that after the first action I had to leave. In general, with regard to the reaction of children to various events and things, adults are often mistaken in their expectations.

S.R. Did the mine like the play “Agatha Returns Home”?

And what are the feelings of the mom-actress playing the main role when the daughter comes to the premiere? OH. Yes, my role is not only the main, but the only one, because “Agatha” is a one-man show.

This is a fairy tale for everyone. An adult will see one there, the child is different. As for the sensations, when Mina came … It was such a big and strong experience both for her and for me!

Know that now your child will come to the hall to look at you! It’s like you have wings, you know?

And besides, Mina finally saw the real result of my work.