The water in the aquarium turns green

“Flowering” of water is typical for various reservoirs, including home aquariums. Water usually turns green in the summer – in July or August, this process can be accompanied by an unpleasant smell and death of the fish.

To get rid of “flowering”, you need to find out its cause. 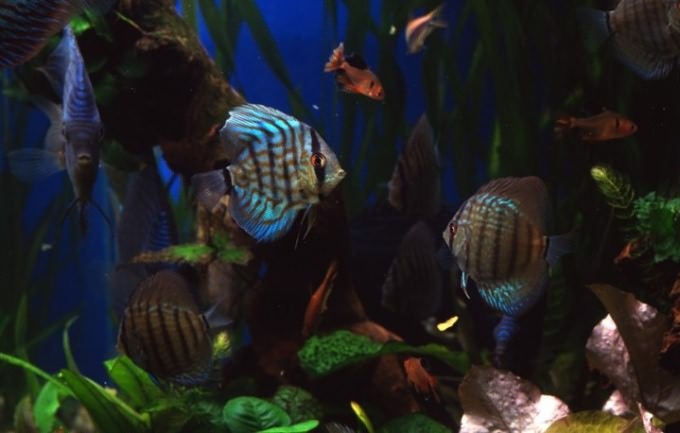 Some factors contribute to the intensive increase in the mass of microorganisms.

2. The most basic reason for the enhanced growth of microscopic algae is a large amount of light. If the aquarium’s lighting is too intense, the water may turn green even in winter.

In the summer, there is enough natural daylight to “bloom”, especially if the aquarium is in direct sunlight.

3. The second important factor in the “blooming” of water is the increase in its temperature. The active division of phytoplankton begins when the water temperature becomes higher than the average annual.

4. The presence of excessive amounts of organic matter in water is another factor contributing to the growth of microorganisms. If you poorly conduct aquarium hygiene and regularly overfeed the fish, phytoplankton, especially Euglena green, begins to divide in this nutrient medium.

5. The last factor affecting the purity of the aquarium is the lack of clean water. If you save on the filter and aeration, chemical-chemical balance of water suffers, which leads to the transformation of the aquarium into a “swamp”.

6. The most radical way to get rid of “flowering” – a complete replacement of water, followed by shading the aquarium. If it is problematic to completely change the water, it can be changed to a third and cover the aquarium from the light. Without illumination, phytoplankton will cease to multiply, and infusoria, for which it is food, will purify water.

In addition, the aquarium can be populated with daphnia, shrimp, catfish, snails, which also feed on microscopic algae.

7. If the water is green – reduce the amount of food for the inhabitants of the aquarium. Normally, fish should eat everything in 5-15 minutes. For a day or two, you can even completely stop feeding – the fish will have enough of the food that is already in the water.

Watch also for the proper operation of the devices for filtering and aerating the aquarium – this helps to avoid excessive accumulation of organic matter in the water.

If all your efforts do not lead to water purification, try using chemicals – they can be purchased at pet stores. At observance of the instruction and the specified doses these substances are safe for inhabitants of an aquarium and plants. 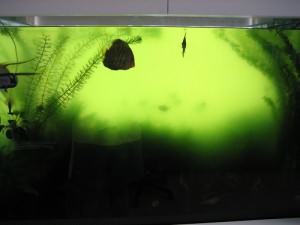 One of the most frequent questions asked by all aquarium lovers is why does the water in the aquarium turn green even when it is regularly replaced? Despite the fact that the green water does not bring tangible harm to the inhabitants, the aesthetic appearance of the aquarium nevertheless deteriorates.

Such water will be dangerous for those fish that run into it from a clean, fresh pond. To choose the most effective method of dealing with euglene, which causes the flowering of aquarium water, it is necessary to establish the exact causes of this phenomenon.

In aquarism there can be problems that can be encountered not only by a beginner, but also by an experienced specialist in this field. One of the most frequent occurrences is when the water becomes green.

The reasons why this happens may be several, however, as well as ways to eliminate this phenomenon. The first reason for the change in water color is an excess of intensity or duration of light, as well as a direct hit of sunlight in an aquarium.

Due to these factors, there is a rapid reproduction of unicellular algae, which spoil the beauty of our little underwater world.

If the process of “gardening” water is not started to a catastrophic limit, then, apart from the aesthetic aspect, there are no special problems. Danger to the inhabitants of your aquarium, this situation does not amount to.

But in order to cope with this problem and avoid it in the future, you need to understand why the aquarium quickly turns green in your case, and what actions need to be taken.

Much depends on the correct choice of location: it is desirable not to have the aquarium in places where sunlight will fall. If you see that the water and glass are green, then shade the aquarium for a while – this will help the destruction of algae.

Remarkable helpers in such cases are catfish, shrimp and snails. It is also possible to launch live daphnids into the aquarium – in much larger quantities than is necessary for feeding.

Fishes will not have time to eat daphnias, and the latter will clean the aquarium for a rather short period of time. Feeding the fish during this period should be stopped.

Partial replacement of water in this case will bring only the opposite effect – the algae will begin to multiply even more intensively.

It is systematically necessary to check the serviceability of equipment providing aeration and filtration of water. You also need to clean the aquarium, soil, glass, leaves of plants.

Timely implementation of these procedures will ensure proper chemical and biological balance of water.

To date, there are many drugs that will help cope with the reproduction of algae – they can be purchased in specialized stores. Such preparations are harmless to the inhabitants of the aquarium and plants, and the simplest algae will be destroyed in the shortest time.