The aquarium fish neon blue or ordinary (lat. Paracheirodon innesi) has long been known and very popular. His appearance in 1930, he created a sensation and did not lose popular until our days.

A flock of blue neons in an aquarium creates a fascinating look that can not leave indifferent. Perhaps, beauty with neon, can not argue any other fish from tetr, nor similar black neon, nor cardinal, nor erythrosonus. And besides beauty, nature gave neons a more peaceful disposition and high adaptability, that is, he did not need any special care.

These factors made him so popular. 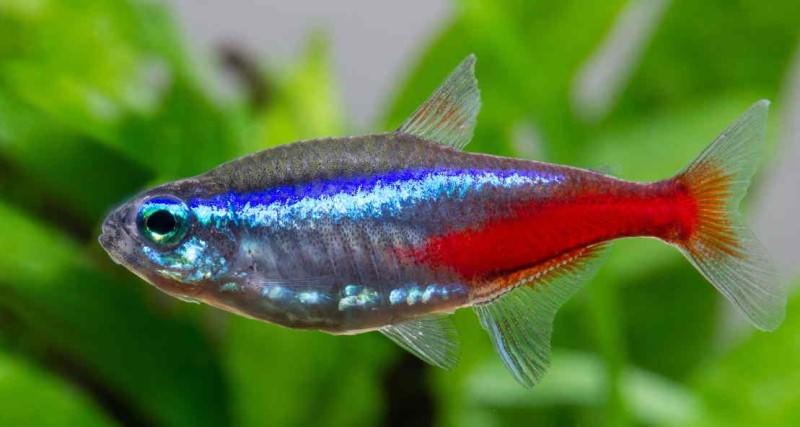 This small tetra is an active schooling fish. They feel most comfortable in a flock of 6 individuals, it is in it that the brightest colors are revealed. Neons are very peaceful and desirable inhabitants of common aquariums, but they need to be maintained only with medium-sized and equally peaceful fish.

Best of all, blue neons look in densely planted aquariums with dark soil. You can also add snags to the aquarium to create the look most similar to the one in which they live in nature. The water should be soft, slightly acidic, fresh and clean.

Neons live about 3-4 years under good conditions in the aquarium.

In the right conditions and with good care, aquarium neon fish are fairly disease resistant. But, nevertheless, like all fish, they can get sick, even there is a disease of aquarium fish, called neon disease or plytiphorosis.

It is expressed in blanching the color of the fish and further death, because, unfortunately, it is not treated.

With a normally running and well-established aquarium, neon can be maintained even by novice aquarists. They are bred in huge quantities for sale, and accordingly have acquired enormous adaptability to various conditions.

Also, neons are unpretentious in nutrition, very livable. But, I repeat, this is on condition that you are fine in an aquarium.

The newly launched aquarium is not suitable for ordinary neons, as they are sensitive to the changes that will occur in such an aquarium. Start neon, only when you are sure that the aquarium has already stood and there is no hesitation in it. Water is preferably soft and sour, pH about 7.0 and hardness not higher than 10 dGH.

But this is ideal, but in practice, my neons have been living in very hard water for several years now. They are simply massively bred and they get along in very different conditions.

In nature, neons live in dark-colored water, where there are a lot of fallen leaves and roots on the bottom. It is important that the aquarium had a lot of shaded places where they could hide. Abundant thickets, snags, dark corners floating on the surface of the plant – all this is perfect for neons.

The fraction and type of soil can be any, but the color is better dark, they look the most favorable on it.
Caring for an aquarium with neons is not particularly difficult. They need warm (22-26C) and clean water.

To do this, we use a filter (both external and internal), and weekly replace water up to 25% of the volume.

Neon Compatibility: non-aggressive, peaceful fish (neons, tetras, swordtails, petsyli, ornatus, pulchera, lanterns).
Not compatible: Neon can not be kept with large, aggressive fish: tsikhly, barbs, large catfish, goldfish, Labe, gourami.
How many live: The life of neon depends directly on the temperature of the aquarium water in which they are contained: 18 ° C – 4 years, 22 ° C – 3 years, 27 ° C – 1.5 years. As can be seen with increasing temperature, the biorhythm of life of neons also increases.

That is why, unlike many other aquarium fish, they can and should even be kept in “cool” water. Find out how much other fish live IN THIS ARTICLE!
Minimum aquarium for neon content: from 10 liters, in such an aquarium you can put 4 neons. Neonchiki are schooling fish and therefore it is recommended to keep them in larger aquariums.

For information on how much neon can be kept in the X aquarium, see HERE (at the bottom of the article there are links to aquariums of all volumes).

Feeding any aquarium fish should be correct: balanced, varied. This fundamental rule is the key to successful keeping of any fish, be it guppies or astronotuses.

Article “How and how much to feed aquarium fish” talks in detail about this, it outlines the basic principles of the diet and feeding regime of fish.

In this article, we note the most important thing – feeding fish should not be monotonous; both dry and live food should be included in the diet. In addition, you need to take into account the gastronomic preferences of a particular fish and, depending on this, include in its diet ration either with the highest protein content or vice versa with vegetable ingredients.

Popular and popular feed for fish, of course, are dry food. For example, hourly and everywhere can be found on the aquarium shelves of food company “Tetra” – the leader of the Russian market, in fact, the range of feeds of this company is striking.

In the “gastronomic arsenal” of Tetra are included as individual feeds for a certain type of fish: for goldfish, for cichlids, for loricarids, guppies, labyrinths, arovan, discus, etc. Also, Tetra has developed specialized foods, for example, for enhancing color, fortified or for feeding fry.

Detailed information on all Tetra feeds, you can find on the official website of the company – here.

It should be noted that when buying any dry food, you should pay attention to the date of its production and shelf life, try not to buy food by weight, and also keep the food in a closed state – this will help avoid the development of pathogenic flora in it. 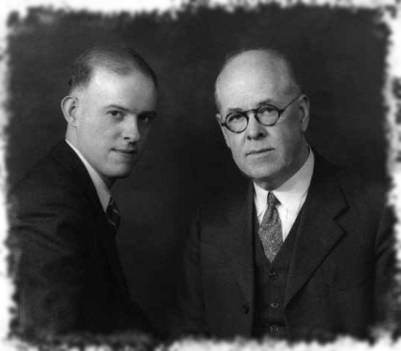 The homeland and natural habitat of neons are the streams and rivers of South America: Peru, Colombia, Brazil. Rivers – top p. The Amazons, from a certain São Paulo de Olivenza to Iquitos, live in the r. Putumayo and r. Purus do Boca do Tapaua. As you can see, the natural habitat of neon is very distant and mysterious.

That is why the chronicle of these fish in the aquarium world is quite young. The starting point of neon as aquarium fish is the year 1935, when Frenchman A. Rabo discovered these neon fish in the waters of the river Putumayo (Eastern Peru).

Discoverer Auguste Rabo He was delighted and surprised by the beauty of the red-blue fish found, which prompted him to bring several individuals to the United States of America and to Old Europe. In a year – 1936 This species of extraordinary fish was studied and described by the American ichthyologist S. Myers. The second homeland of neon is Germany.

This is due to the fact that it was the Germans who managed to first dissolve neons in artificial conditions. At that time – it was a sensation, since neither in the United States of America, nor in France did the fish breed in artificial conditions. The German breakthrough in the breeding of neons was caused not so much by the merits of man as by the presence in Germany of very soft water, which neon fish like so much.

Description: Neon is a small, nimble fish. In aquarium conditions, males reach sizes up to 3 cm, and females slightly larger – up to 3.5 cm in length.
Neon Color: There are different types of neon and the color of each is different. In general, all neons are united by one thing – a neon strip passing along the whole body, which actually gives a reflection inherent only in these fish.

Behavioral features: Neons – peaceful, gregarious, nimble fishes. Fish are great in the aquarium in a group with a large number. Their briskness requires from the aquarium – space, which is so necessary for maneuvers.

The corridors (speckled catfish) are considered to be friends and helpers of neons, they do not interfere with the neonas to monitor the purity of the aquarium soil.