Algae on the walls of the aquarium 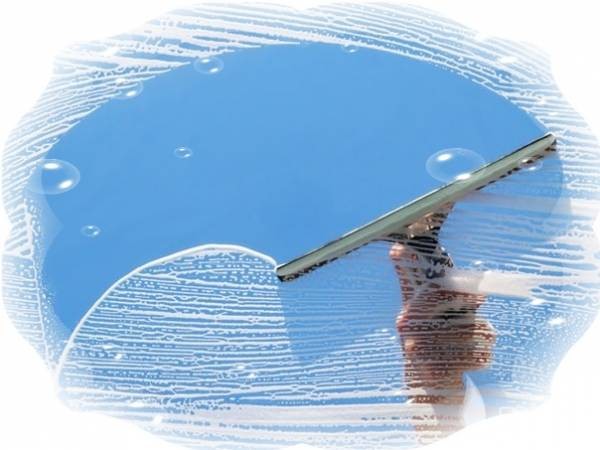 All types of aquarium plaque.

This article is devoted to such a problem of “aquarium hygiene,” as plaque on the walls of the aquarium. So:

This is achieved by proper and regular cleaning of the aquarium, as well as the use of necessary drugs in case of deviation from the norm. It should be noted that excessive care: cleaning and changing aquarium water can also lead to adverse consequences. Accurate recommendations regarding this issue are difficult to give, because it all depends on: the volume of your aquarium, the types of fish, plants, the location of the aquarium, etc.

In general, you should follow general recommendations – i.e. recommendations on weekly cleaning of the aquarium and cleaning equipment. I would also recommend you to remember that old aquarium water is always better than fresh water – do not overdo it with cleaning and changing water.

Remember the balance of plants and fish, never overload the aquarium, do not make him a hostel. In your arsenal should always be the primary means of response: aquarium coal, methylene blue or malachite green.

How to deal with them. Simple enough!

Relative to green scale on the walls of the aquarium, which can also be formed and the decorations of the aquarium (artificial plants, stone). This plaque is caused by excessive “water blooming” – the formation of an uncontrolled amount of algae.

This plaque is caused by the lack of care for the aquarium and as a result of an excess of organic matter (ammonia decomposition products).

Remedy: clean the aquarium, replace the aquarium water with fresh water, turn off (do not turn on the backlight), increase the filtration and aeration of the aquarium; in the pet store you can buy tablets from flowering – from algae. I will cite as an example, one of them – TETRA tablets for algae control. 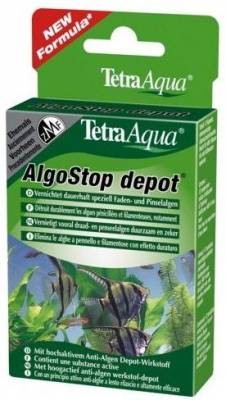 Mode of application: Tablets are placed on the ground in the free flow area. The drug lasts for 6 weeks, after which the tablets are removed from the water.

Tablets contain a complex of substances that are gradually released into the water. The tablet does not dissolve completely, but retains its original shape.

With proper use of the drug does not harm aquarium fish and plants.

Dosage:For prevention: 1 tab. on 50 l. water. For the destruction of filamentous algae: 1 tablet per 25 liters of water.

The article on other Tetra algae tablets is here!

Aquarium: walls, decorations or equipment covered with white bloom – whitish mucus, what to do?

If the glass and stones in your aquarium are overgrown with green algae, then its appearance leaves much to be desired. Such green jungles cannot be called attractive, and something must be done about it.

I will talk about three simple ways to combat this phenomenon. 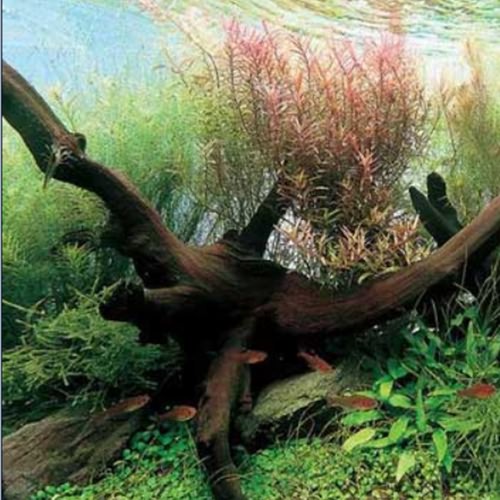 1. Cleaning the walls of the aquarium. There are dozens of different devices for cleaning aquarium from a raid of green algae.

There are various scrapers working on the principle of a razor, and much more complicated trowels with a strong magnet that allows you to control the cleaning part through the glass. But all these funds cost money, but they do not bring any particular benefit.

For three years I cleaned the walls of the aquarium with an ordinary dishwashing sponge. Simple and effective!

And, most importantly, not a single scratch, which happened because of the scrapers with a razor. 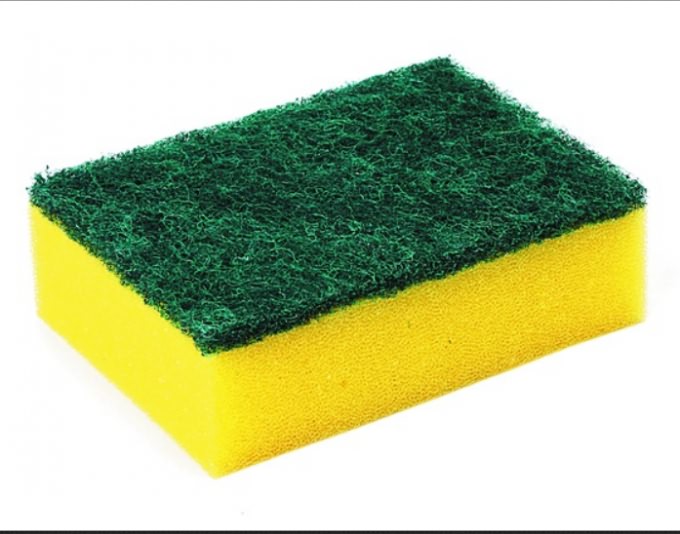 2. Cleaning artificial algae and various decorative elements in an aquarium, such as gates, grottoes and curtains, is a more complicated process. But there is a cheap and reliable way.

An old toothbrush has proven to be the most effective. It is able to handle the most uneven surfaces and very high quality! 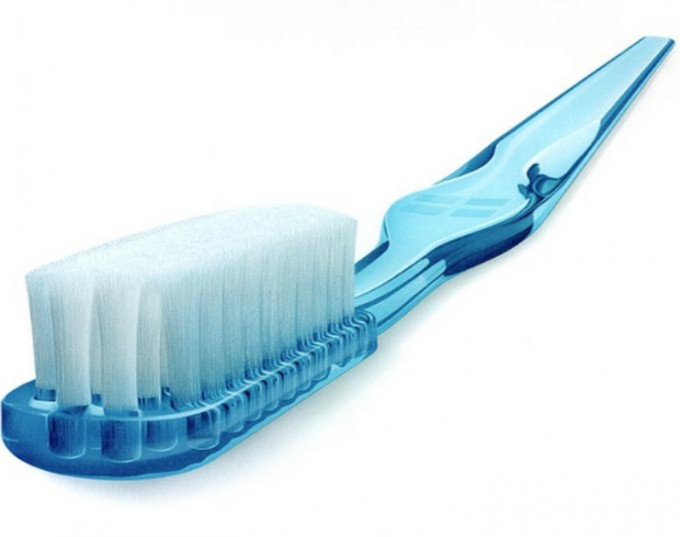 3. The most correct way to clean the aquarium from the plaque of green parasites – biological! Ancistrus ordinary (Ancistrus dolichopterus) can alone solve the problem of all small algae, without harming the so-called higher plants. 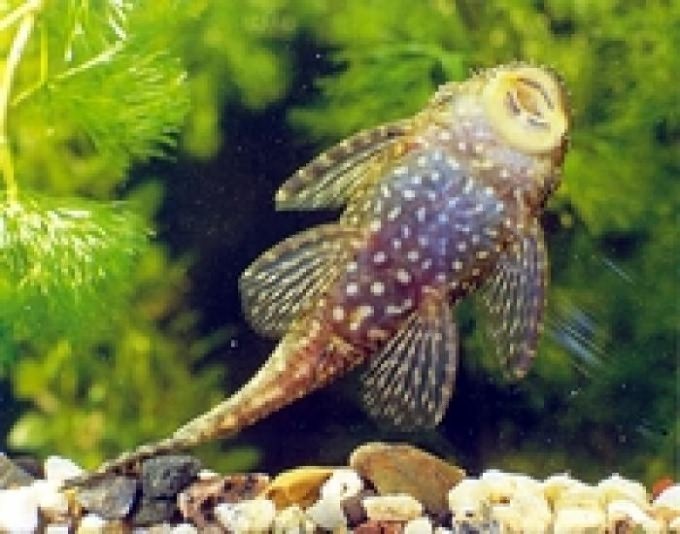 Antsistrusa in no case can not be spoiled. If you teach him to feed for fish, then he will not need to work – because you can get food and just like that.

To prevent this from happening, make sure that all food filled with other fish is eaten and not laid at the bottom: i.e. feed them in moderation.

Antsistrus is peace-loving, but he will not give himself offense either. Therefore, in theory, it is compatible with almost any freshwater fish.

Scientists refer to the blue-green algae to the class of bacteria. In appearance, they resemble a mucous carpet on the surface of an artificial reservoir of a dirty brown color. Such living forms have exceptional adaptability and vitality.

If the blue-green alga started up in an aquarium, then it will be difficult to get rid of it. 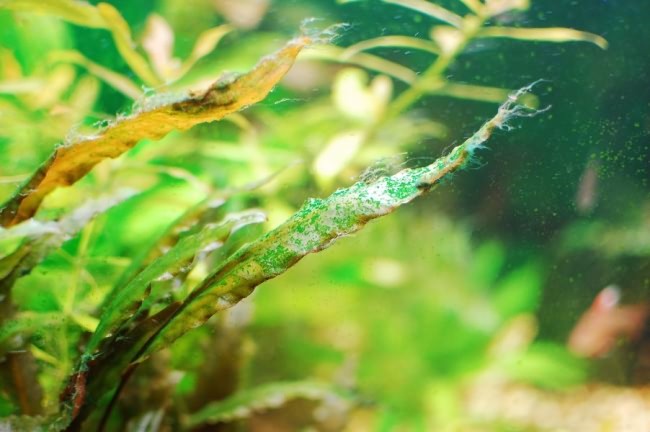 If you give a precise definition, it is cyanobacteria that appear on the walls of the aquarium when it is exposed to prolonged exposure to direct sunlight, or when the water temperature is higher than is required. Also beneficial to the development of blue-green is a large amount of organic impurities. Such bacteria quickly begin to develop if the aquarium is not regularly cleaned.

Also, the cause of cyanobacteria is a rare change of water in the aquarium.

Blue-green algae is very unpretentious, they have enough minimum conditions for development. These bacteria take all the nutrients necessary for their development and growth out of the water.

They grow not only on the ground, but also on any object that may be at the bottom of the aquarium: stones, snags, shells. The unique ability to restore quickly allows blue-green algae to quickly restore its population.

Therefore, to get rid of them is not so easy.

The peculiarity of these microorganisms living in the aquarium is an unpleasant odor. The greater the surface of the artificial pond covers the blue-green alga, the more polluted the water becomes, and the aquarium itself turns into a decaying puddle. 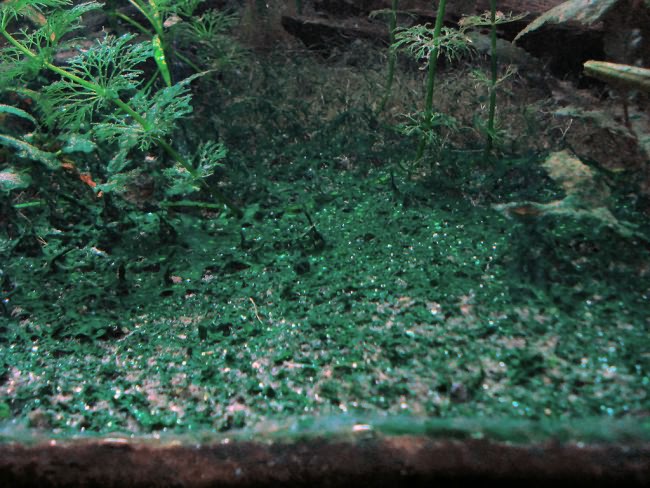 The detrimental effect of blue-green algae on the artificial microclimate of an aquarium is that they prevent water from dissolving oxygen, increasing the amount of nitrogen in it. Getting rid of such bacteria is not easy.

There is a special way to deal with blue-green algae that every aquarist should know.

Algae in the aquarium are a sign of an established biobalance. They appear on plants, stones, glass walls, and even on equipment. However, their rapid growth means that fundamental changes are taking place in the aquatic environment.

In an aquarium where there are a lot of plants, algae will not appear in large quantities. Good aeration and water filtration will stop their growth. Timely removal of food residue and dirt contributes to the purity of water.

If you notice that brown formations appear in the reservoir, it means that brown algae have settled in it. How to get rid of kelp and suspend their reproduction?

The origin of brown algae, symptoms of formation

If you notice that brown algae appeared in a newly launched aquarium, and they began to spread in large quantities, then the fight with them will be easy. Observe the correct mode of maintenance of the tank, and in 2-3 weeks the problem will be solved. Carry out regular cleaning of the aquarium, change 20-30% of water once a week.

When aquarium plants begin to grow, the algae will disappear due to the large amount of dissolved oxygen.

When an algae outbreak happened in an aquarium with “old” water, it is necessary to replace water already 2 times in 7 days, changing 30% of the volume of water. When replacing it is necessary to thoroughly clean the tank from excess food, waste products of fish.

Use a scraper to clean the glass of the aquarium, wipe the bottom, clean the decorations and plants with a toothbrush or a clean sponge.

Check the degree of contamination of the filter, if the filtration rate has decreased, then the filter is clogged. Clean the filter, but do not change its contents. Reduce the length of daylight hours to 6 hours a day for several days, and the next 2 weeks bring it up to 10 hours gradually.

If the lamps work for 1 year, it is better to replace them with new ones, but not all at once, but in turn. Brown scurf appears in the tank in a week, and it takes almost a month to fight it. 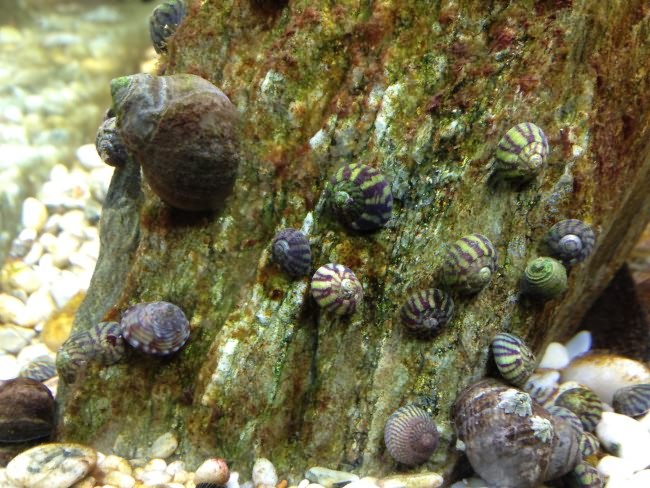 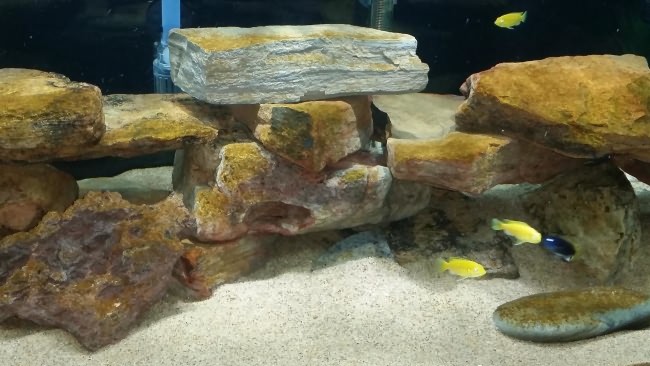 There are chemicals that can affect diatoms. Some funds worsen the situation, delay the reproduction of beneficial microorganisms, from which the fish will suffer. Drugs that can help with the removal of brown plaque, should be used according to the instructions.

Be careful and cautious – some chemicals can harm not only parasites, but also plants with fish.

The articles describe the following diseases, their signs and methods of treatment: alkalosis (alkaline disease), ...

Hello, friends! Today I do not want to write about any plants, fish and so ...

Hello colleagues. We continue to deal with the most frequently asked questions about aquarism. Today ...