How to draw a fish tank

If a baby grows up in a family, then sooner or later the parents will be asked the following question: “How to draw a fish?” And adults do not always know the answer to it. Therefore, this article provides step-by-step instructions explaining how to draw a fish and how to depict an aquarium without being an artist. 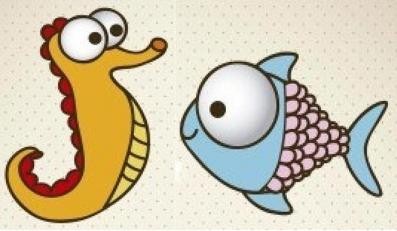 Cool fish in the design of the home

Knowing how to draw a fish can also be useful for decorating a child’s room, for example, for applying cool drawings to wallpaper. Decorating with sea creatures of the bathroom or directly the inner surface of the bath will also make this room attractive and unique. And you can make a fancy lamp by sticking starfish and dolphins, fish and algae cut out of film on it.

Some needlewomen can perform tapestries and carpets. Using fun funny fish as heroes of their works, they will be able to create a unique unique wall mat or bedspread on the bed or sofa. 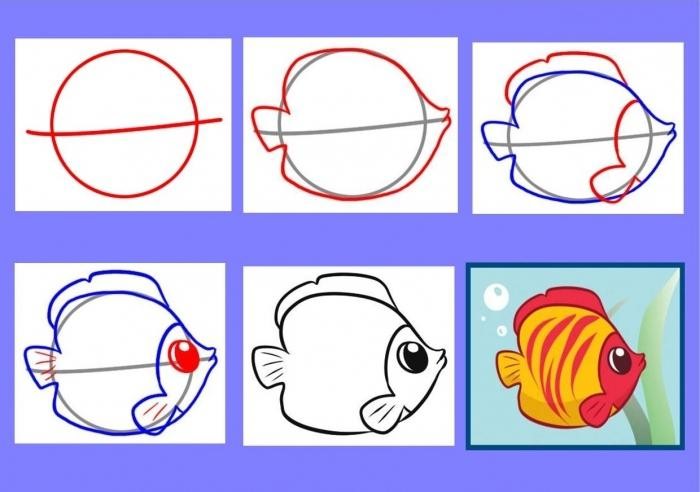 1. Having carefully considered the picture attached to the article, you need to follow its instructions.

Since it is easiest to draw a fish, starting with an oval or a circle, you must first draw a circle (or oval) with a pencil, crossed with a line at a slight angle to a parallel plane. Draw should be a simple pencil thin dashed lines, having an eraser at hand.

2. The second step is to design the contour of the body of the fish: you need to make a bulge in the back of it, lengthen the “face”, outlining the mouth, make the tail.

3. The third step – the outlines of the upper fin are made. Also formed the gills and anterior lower fin.

4. Now you can put on the eyes of the fish, stripes in the tail and fins.

5. The eraser should remove all auxiliary lines, and the main circle with a pencil with pressure.

6. You can paint the fish with paints and felt-tip pens, as well as with colored pencils.

So it is so easy and simple to draw a cool bright fish!

Master class drawing a round aquarium

If someone cares about how to draw an aquarium with fish, then he should use this master class already. You should also draw with a simple pencil with dashed lines – without pressure, so that later you can easily remove all auxiliary lines with an eraser. 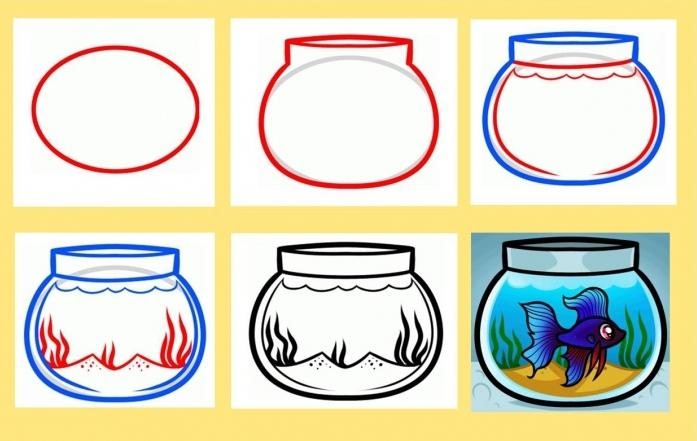 1. Start the drawing process should be with the outline of the oval.

2. Next, a novice artist draws the top of the aquarium – the “throat” of the tank.

3. This stage includes the design of the surface of the water and the thickness of the glass – in parallel along the walls of the aquarium a part of the circle is drawn that does not close down near the bottom, and a slightly concave line is drawn from above.

4. The artist, drawing on his imagination, depicts a sandy bottom and algae.

5. The eraser removes the auxiliary lines, brighter outlines the main ones.

6. When coloring the picture, it should be noted that there should be a glare in the middle of the depicted object, so in this place the color is less saturated or completely absent.

7. If desired, you can put fish or turtles, shells or snails in the aquarium. How to draw a fish, you can learn from the previous master class.

Now it remains only to dry the picture, insert it into the frame and hang it on the wall – let it please everyone, give a good mood and decorate the room.

The walls of the nursery, bath, doors can be decorated with images of fish, aquatic plants, marine animals. But how to draw a fish, if such a design idea occurred to me? It is not necessary to make a drawing one hundred percent naturalistic.

It is quite possible to use stylized images of fish. 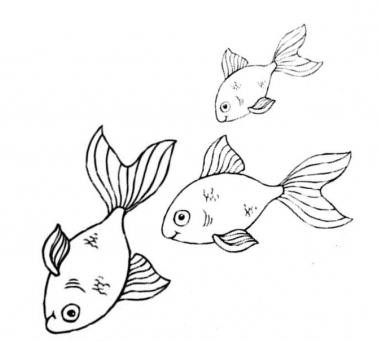 We use children’s drawings for design purposes.

Making drawings is a snap. First you need a pencil on paper to depict such pictures, which will be to the liking of both the child and the artist-designer himself. Then you can cut them and stick on the wallpaper where it is appropriate.

By the way, it is quite possible to attract the children themselves to the drawing process, since many kids can draw small fish. And how nice it will be for little people to take part in the design of a nursery or bathroom!

How to draw a fish decorative?

Decorative drawing is different from naturalistic in that the objects depicted look fabulous, they often have the features inherent in people: smiles, funny expressions of “faces”, freckles or eyelashes. Our fish will only be awarded with a smile and puffy cheeks, the rest of it will be as close as possible to reality.

Since it is impossible to draw small fish like real, living kids, many details are still drawn schematically.

Master class “How to draw a fish with a pencil” 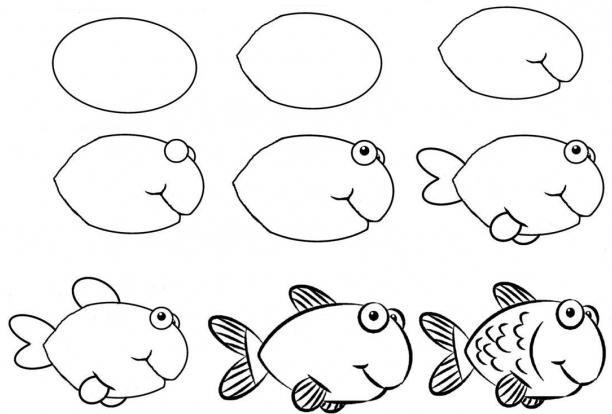 First, draw an oval on paper.

Then one end of the oval is slightly narrowed and pointed — the tail will be located there.

From the opposite end of the tail on the oval, they draw a mouth with a smile that “ends” with puffy cheeks – they are depicted with the help of an arc.

Then you should draw eyes. They can be positioned both inside the oval-body and made protruding, like the eyes of an aquarium telescope fish.

Smaller circles are placed in the eyeballs, blacked out – these are pupils. It is very beautiful if you have small white circles in the black pupils – glare.

The upper fin can be painted with an oval, or you can use a “fence” – it all depends on the desire and taste of the artist.

Hatching should be applied to the fins and tail.

Now it is necessary to emphasize the gills with an arc, and “cover” the body of the fish with scales. 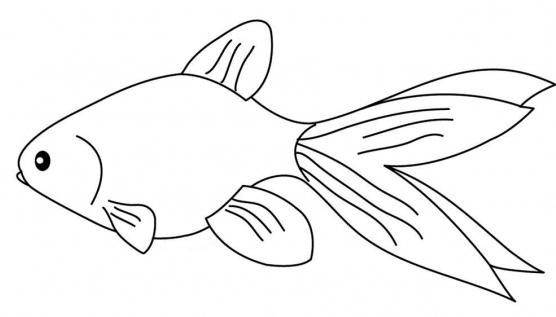 How to draw a goldfish with a pencil

Aquarium goldfish enjoys universal love. Children love to draw her. Sometimes they add a small crown to it, and the heroine of Pushkin’s fairy tale, Golden Fish, fulfilling wishes, is obtained.

It is possible to draw a goldfish in the same way as a regular fish, but it should be noted that usually this species has a luxurious veil-like double tail. The eyes of a goldfish can also be positioned as usual, and be slightly protruding.

If the decision is made to depict a goldfish more plausibly, then it should be noted that it differs from other fish like a small “hump” at the top of the calf and a rather voluminous tummy. The line depicting the belly of a goldfish bends rather steeply in the back half of the body.

How to draw an aquarium with a pencil :: how to draw cuts on a parallelepiped :: Drawing

To draw an aquarium with a pencil is possible even for a novice artist. 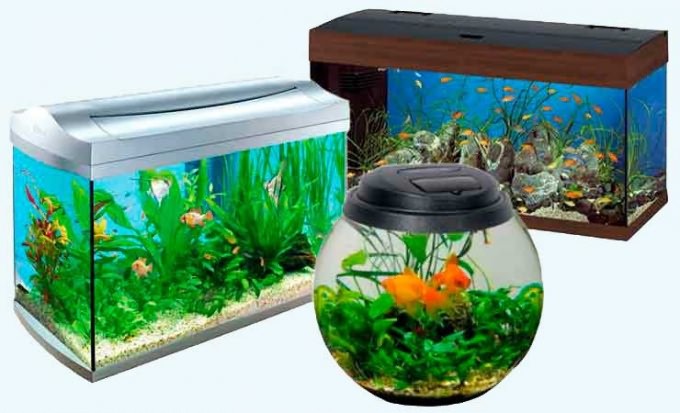 Aquariums come in different shapes. It can be a cube, a box, or a ball, so first you need to learn how to draw the corresponding geometric body. Step by step sketch start with drawing a ball.

Sheet can be put both vertically and horizontally.
Draw a horizontal line. It denotes the surface of the table, which can not draw.

The line is needed just to focus on the plane of the sheet. Draw a circle so that one of the points touches this line.

The basis for the aquarium you have ready.
To draw a cubic aquarium, you need to know the elementary laws of perspective. The front wall is square, the side and top are parallelepipeds.

The ball you have drawn should naturally have a hole on top. Imagine that a part of a sphere is cut off by a transparent plane – for example, glass.

If this plane is at the level of your eyes, it seems just a strip. Looking at it from above or below, you will see an oval.

Use solid pencil to draw the inner contour. It is needed in order to convey the thickness of the walls.

Do not forget to outline the inner contour and at the top of the oval.
The aquarium may be with a lid, but first you still need to draw a slice.

The aquarium world seems a bit twisted due to the fact that it is located behind the convex glass. The fishes look thicker than they are, the algae look more curved, and the stones look flatter.

At the bottom of the aquarium is usually a layer of sand. It is also better to depict the underwater world in stages.
Mark the soil thickness. Draw a few stones – it can just be ovals or circles. Algae can be outlined with smooth curves from the bottom to the upper oval.

The configuration of the lines can be the most bizarre.
Populate your aquarium – draw one or two small fish with lush tails and large fins. However, a whole flock of small fish can live in a round aquarium – they can be depicted as ovals or long strokes.

Draw algae, fish and stones with a soft pencil, apply shading with a hard pencil. Start from the bottom.

To make the aquarium seem really round, apply strokes in different directions — horizontal, then at an angle. Apply arc-shaped strokes to the back wall of the aquarium.
As for the front wall, its convex shape is best conveyed by strokes parallel to the side lines. At the contours of the line are thicker, in the middle of the lines almost no.

Even if you put strokes in several layers, they should not obscure the contours of algae, stones and fish. Your drawing is ready.