How to crochet a fish

How to crochet a fish :: make a fish mask :: Needlework

A crocheted fish can be an element of a didactic rug, a washcloth, a pillow or a toy. For such crafts it is not necessary to buy thread specifically. It is well suited remnants of yarn, which is always in the box needlewoman.

Loofer can be knitted from bright synthetic twine. 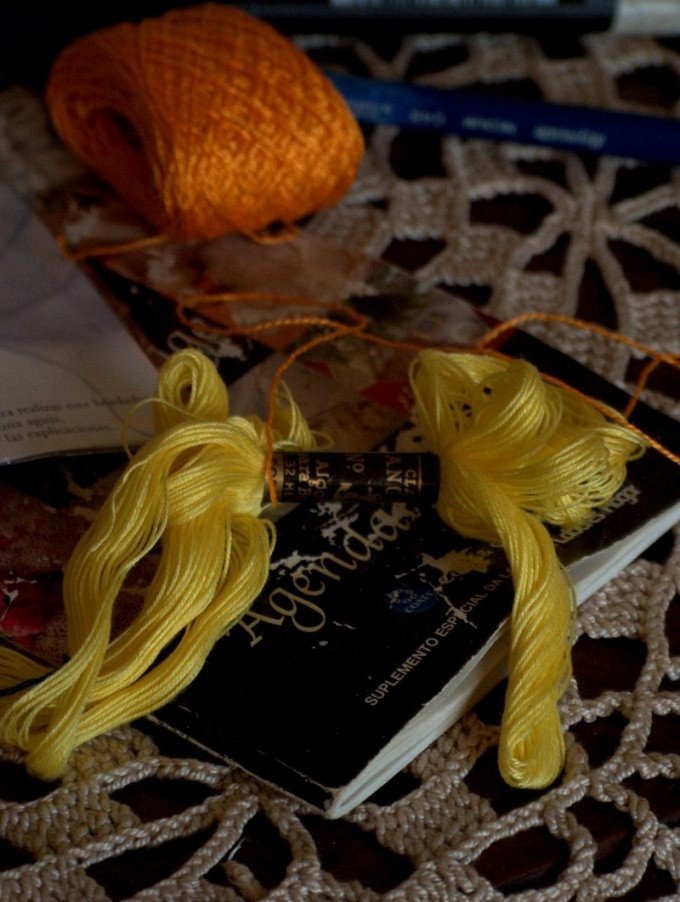 1. Consider the image of any fish. You will see that her torso is a circle or an oval. It may also have a shape close to a triangle.

Fins and tail most often triangular. From this and should proceed when knitting. Pattern can not do.

However, for a toy or pillow, you will need 2 body parts, and they should be the same. Therefore, remember or write down how much you add loops.

2. For an element of a didactic rug and for a washcloth fish, tie a flat oval. Make a chain of air loops. It is not necessary to close it to the circle, it will be in the middle of the oval.

At the end of the chain, make 1 loop on the rise and knit a series of simple columns. In the initial loop, link 3 such columns.

Turn the work so that the next row knit on the other side of the chain.

3. Next, knit simple columns in a spiral, adding loops evenly. Tie the ends of the initial chain in one column 3 or 5, as they did in the first row.

In the intervals, also knit 2 columns in 1 so that the oval remains flat. Tie it to the desired size.

4. To make a toy fish or a pillow, link 2 convex ovals. Start them the same way with the chain. With 3 rows in every fifth column, tie two.

The body should not be collected by folds, but should be sufficiently convex to enclose a piece of foam rubber or paraplena in it. Connect the halves of the trunk with simple columns, leaving a small hole and not cutting off the thread.

Stuff the toy and close the seam.

5. Fin can begin to knit immediately from the trunk. Mark its beginning and end on the back of the fish. Tie a row of threads of a different color.

From the second row, start gently lowering the loops to form a triangle. He can be any.

For example, you can evenly reduce the edges of 1 loop in each even row. Then you have an isosceles triangle. And if you reduce the front by 1 loop through the row, and from the back through 2, you will get a fin tilted to the tail.

Make 1 or 2 fins on the belly of the fish. It may just be strips that also start from the body.

Knit them to the desired length without adding and reducing loops.

6. Tie the tail. This detail allows you to show imagination like no other.

The tail can be made, for example, in the form of a fringe, bound crochet on the line. You can make it in the form of several multi-colored stripes or triangles. Mounts can also be different.

For example, tie strips. Put them together, aligning the short sides, fasten crochet and tie to the back of the torso.

In the same way several triangles can be connected. If you have loose synthetic threads, make a bundle of them, attach it to the body with one end, and fluff the second.

7. Embroider the eyes and mouth. They can and vyazat.

Tie the eye to the body.

If the fish is intended for a didactic mat, make a hole for the eye in front of the body. As an eye in this case there will be a button on which the fish is fastened. 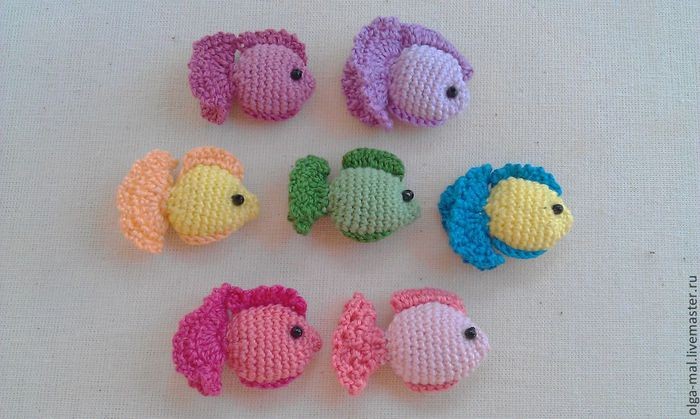 Fish are small, 3-4 cm in length, depending on how thick the thread is used. In order to knit such fish, we need minimal knitting skills: to be able to knit without crochet (cbN), double crochet (cc), connecting bars (cc), increase (prib) and subtract (kill).

For knitting fish I needed the following materials and tools: threads “Iris” (two colors or shades), crochet hook No. 1.25, synthetic winterizer, 2 beads for the eyes, a needle for sewing the eyes and pulling the thread, scissors. 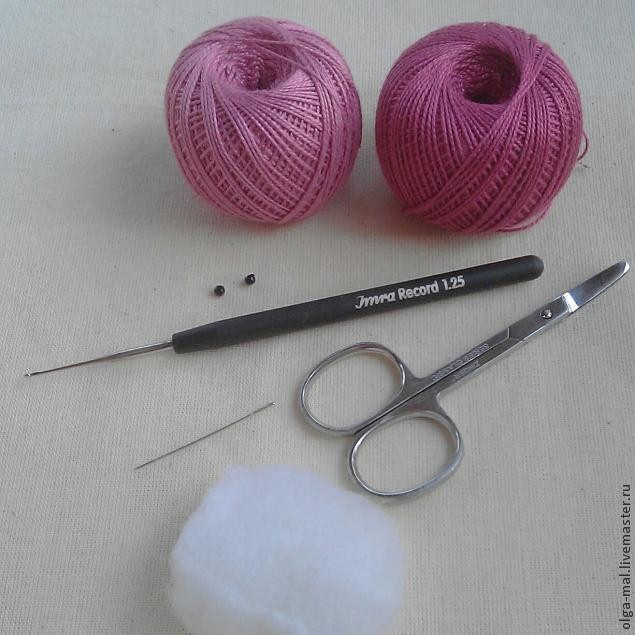 Since the fish is small, it is important to count the loops (the change in the number of loops, even by one, will be noticeable in the proportions of the fish). We knit for both walls of the loop of the previous row.Spout and body fish knit in a circle, without lifting loops. 1 row: with a light thread, type two air loops (or do an amigurumi loop), 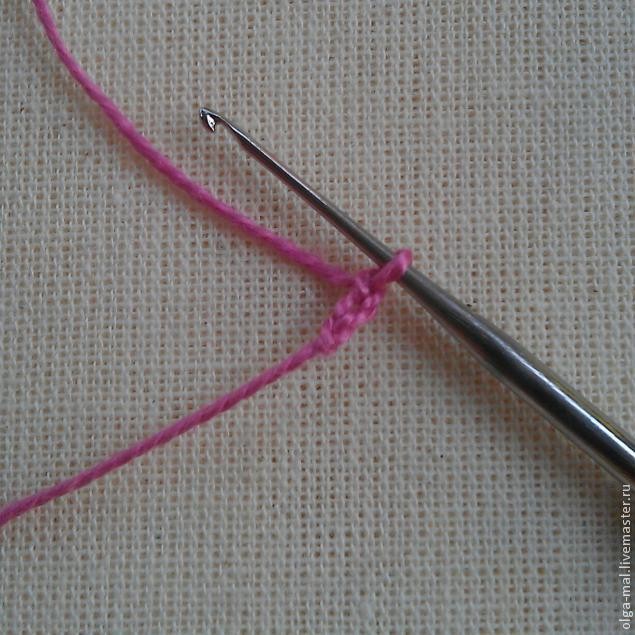 then in the first loop (or in the loop of amigurumi) we knit 6 columns without single crochet. 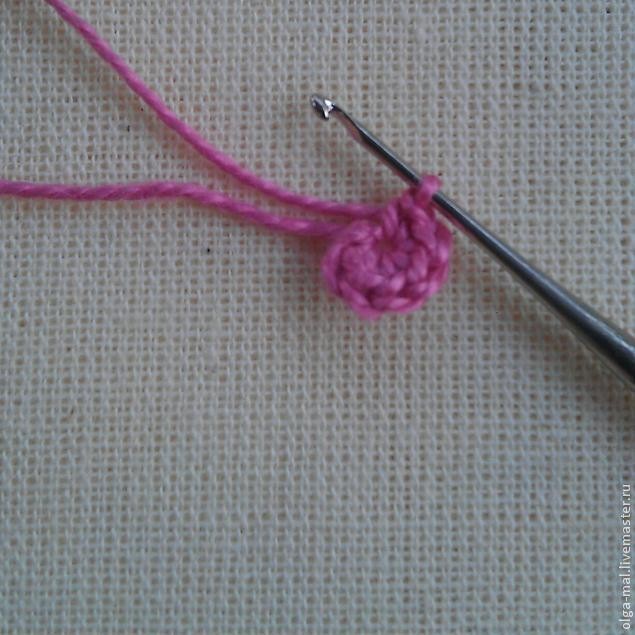 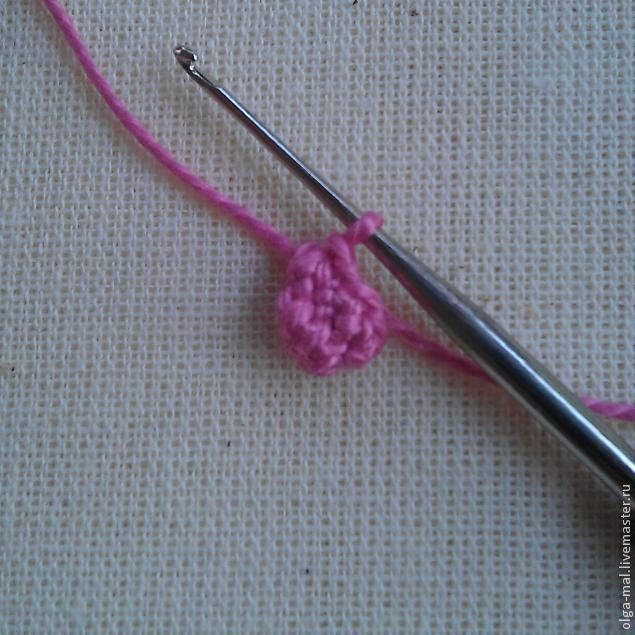 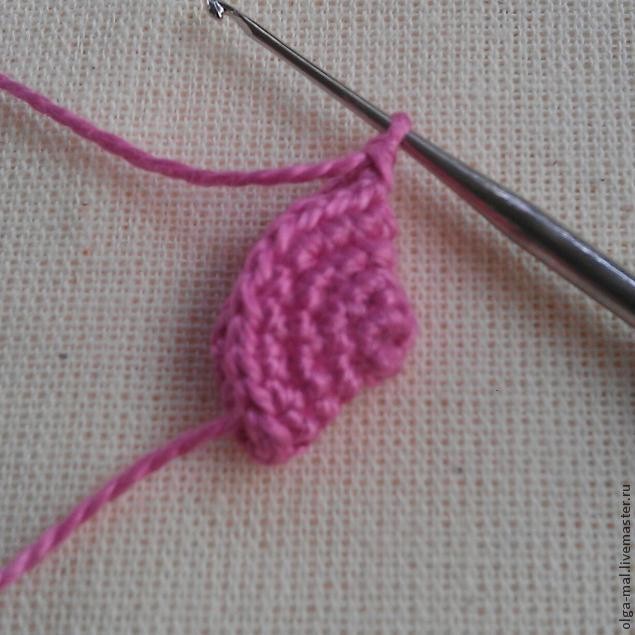 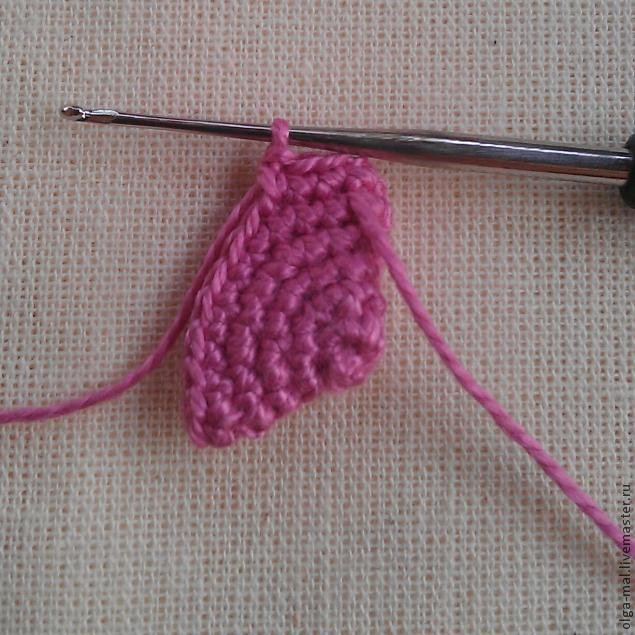 It turned out such a spout and body: 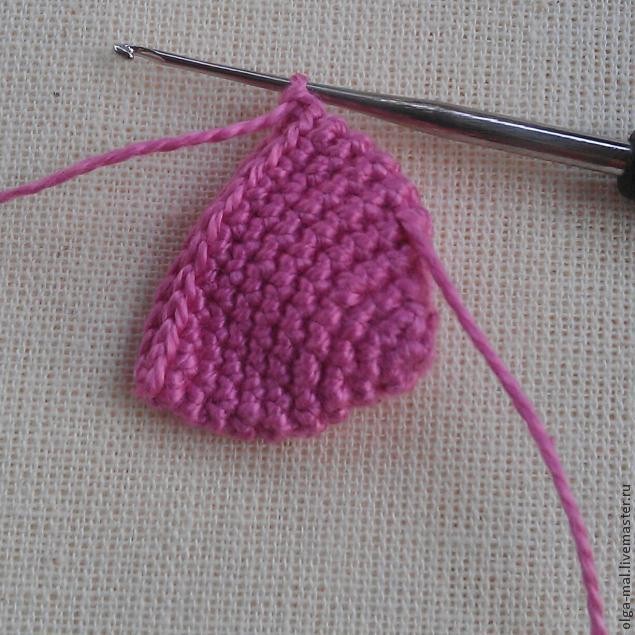 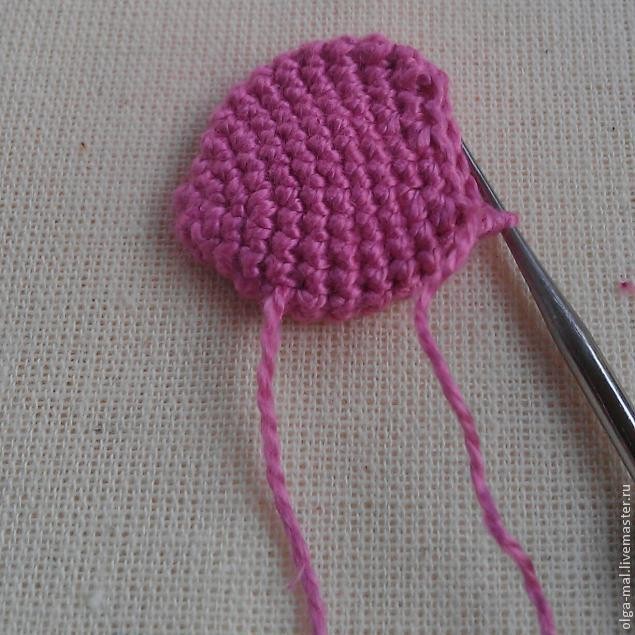 Fill the fish with padding polyester, slightly squeezing the sides and giving the calf shape. 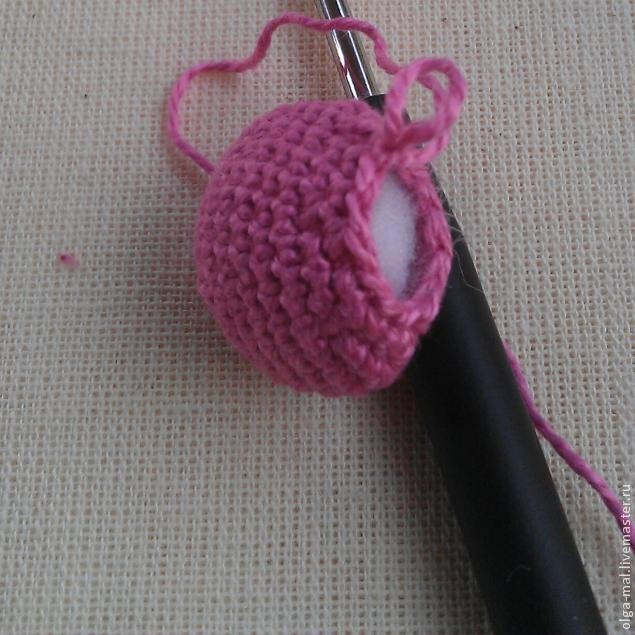 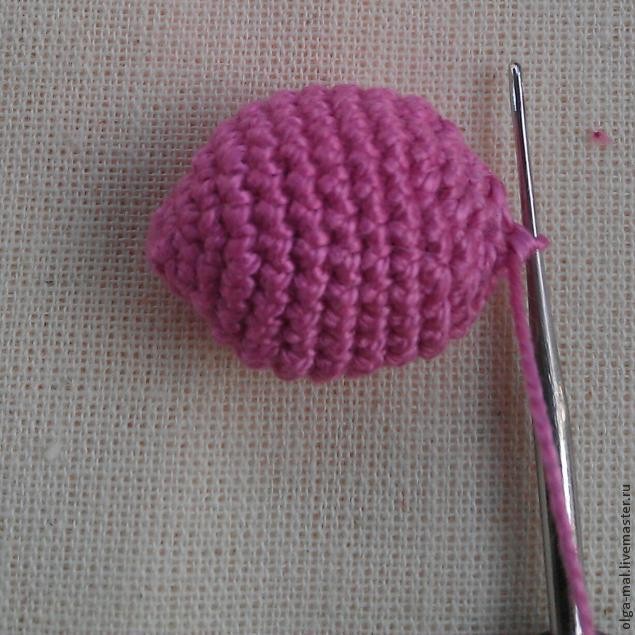 Tail.13th row: With a thread of a different color, we make 2 air loops (vp) – lifting loops. I leave a long, about 40 cm, thread, which I then knit the fins. The thread does not interfere, as it is always inside the tail.

We knit in each loop of the previous row of 2 sbn (12). At the end of the row knit connecting column. 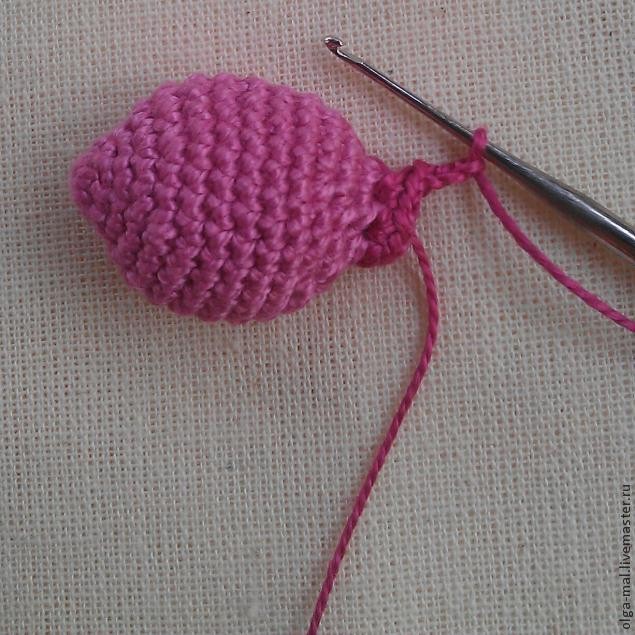 We finish a row with a connecting column. 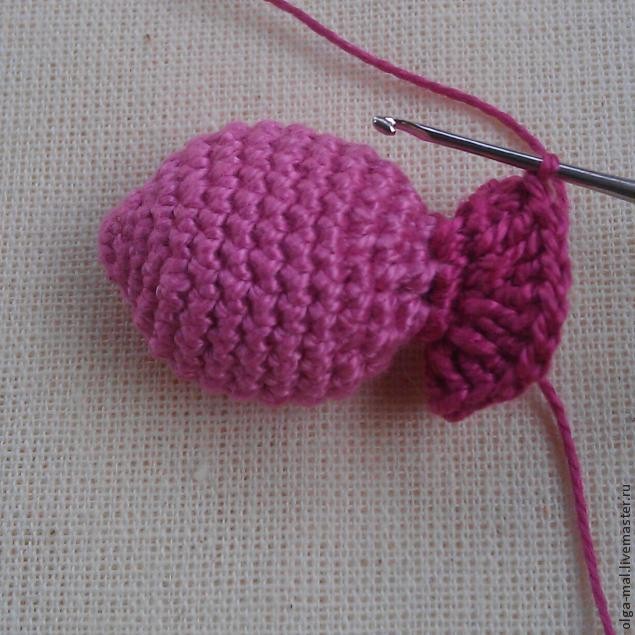 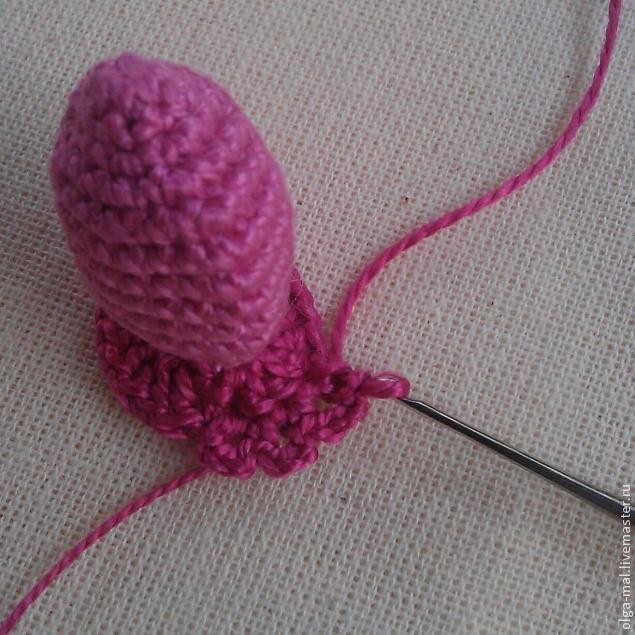 Repeat until the end of the row. 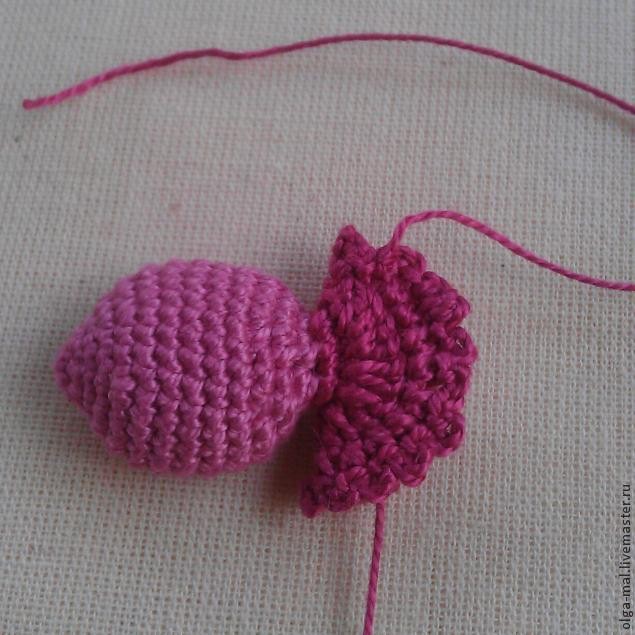 To fix and cut the working thread. You can experiment with the tail: If you want the tail to be less lush, then in the 14th row you can alternate (1 sn and 2 ssn) 6 times (18). 2) VP, connecting column in the next loop, repeat to the end of the row. Then the tail will be a little shorter. You can knit two rows of arches … In general, there are a lot of options for knitting a tail, everything depends only on your imagination.The fins.

Thread left at the beginning of knitting a tail with a needle into the upper part of the head (where the upper fin will be can be determined by the shape of the spout: the nose on one side will be more “lifted up”). 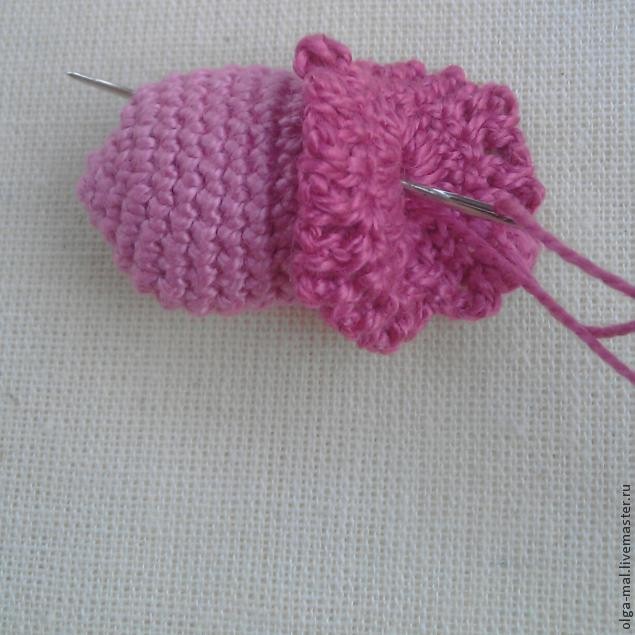 Knit 7-8 crochets along the back. 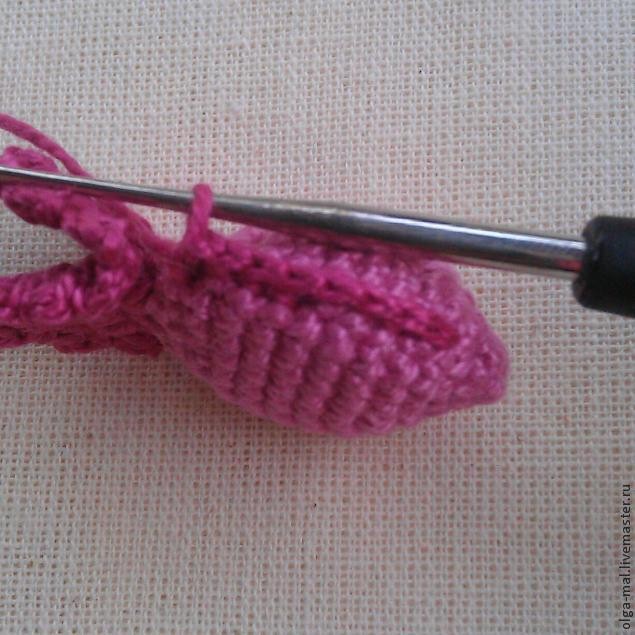 Turn knitting and knit arches: 2 air loops, then a single crochet into the next loop. 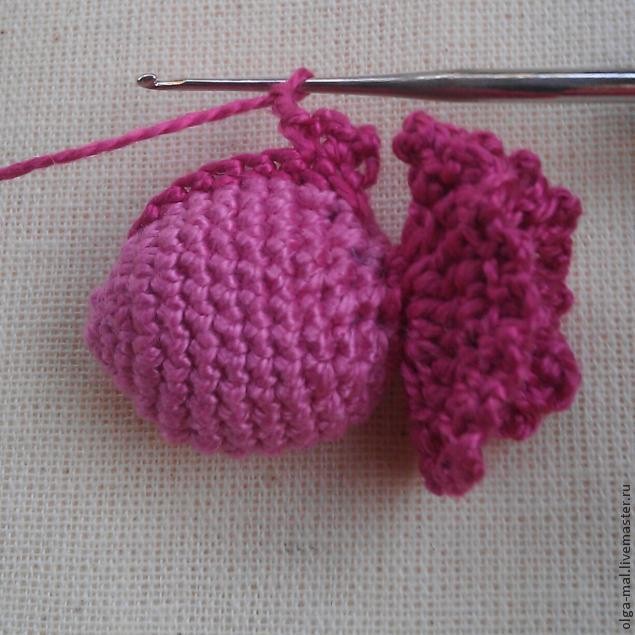 Then pull the thread 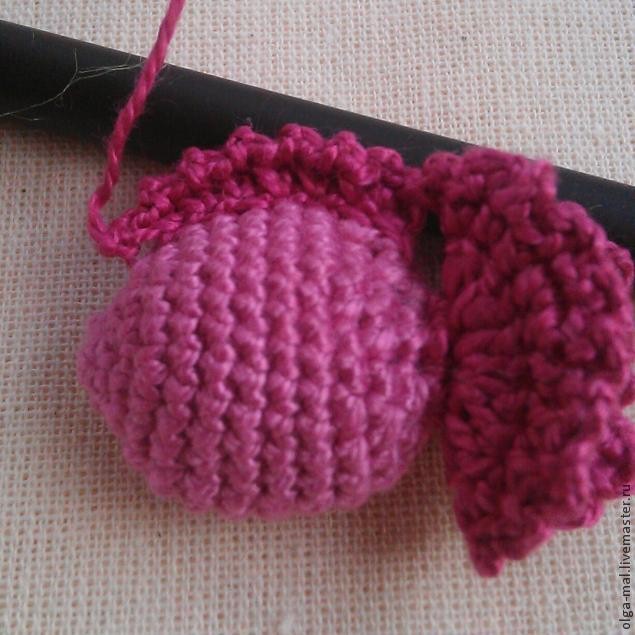 Embed the thread in the needle and stretch it to the bottom of the fish. 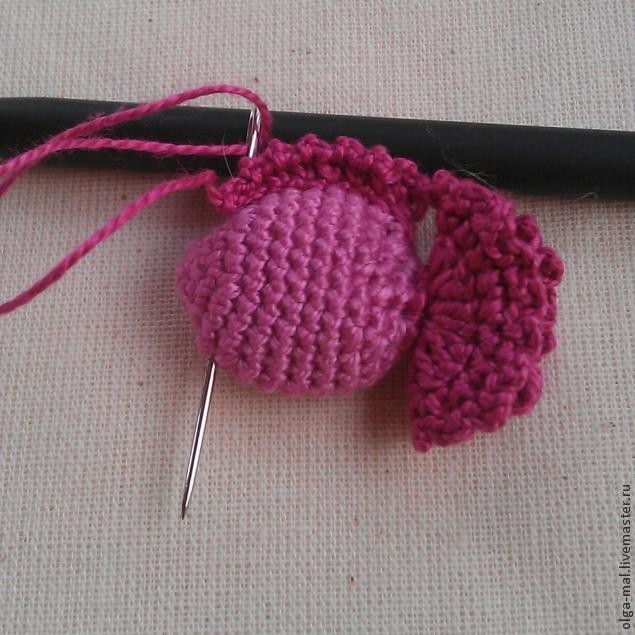 Knit along the belly of the fish 6-7 columns without nakida. 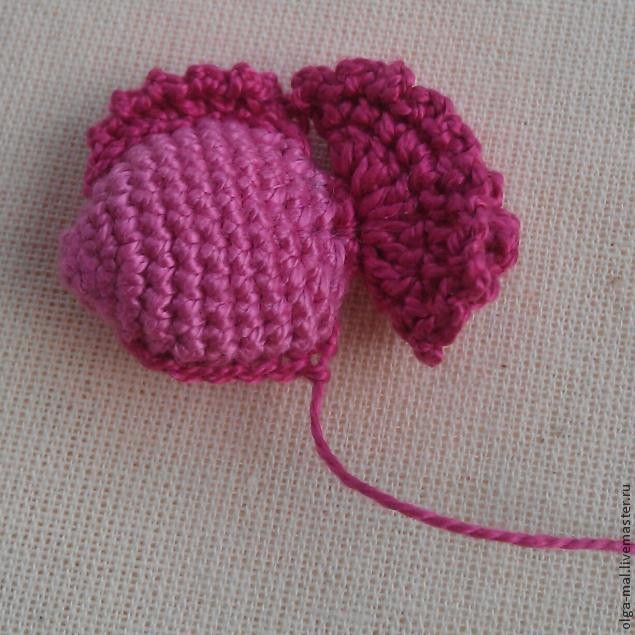 Pull the thread, thread it into the needle and thread it through the hole at the beginning of the tail. 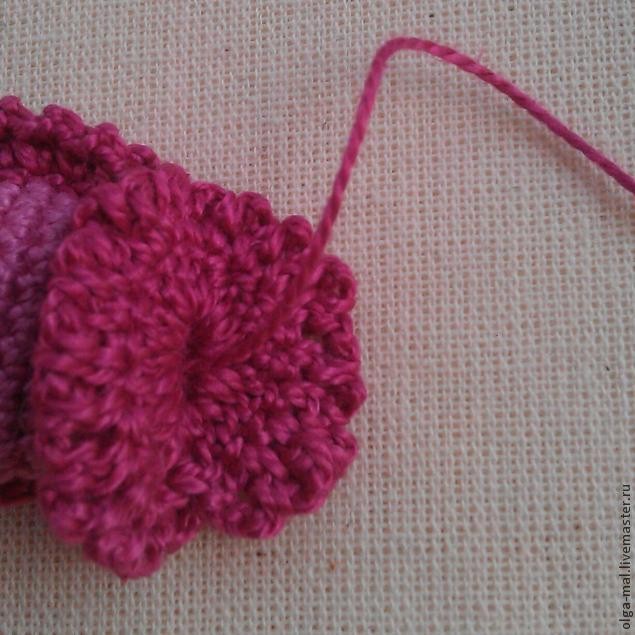 Fold the tail and stitch it so that the sintepon was not visible (if desired, the tail can be not stitched, then it will be more magnificent). Secure the thread. 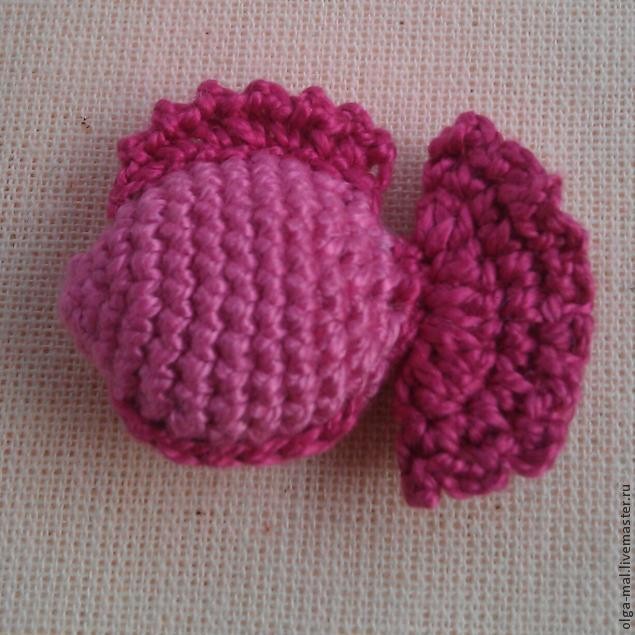 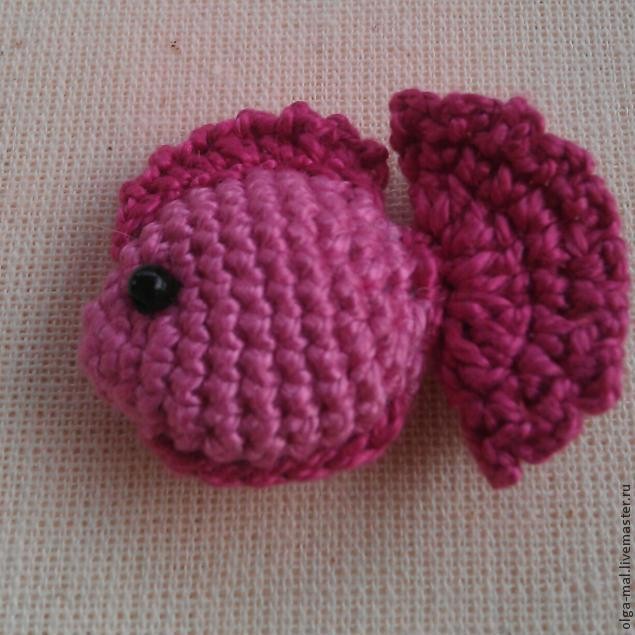 The fish is ready! The fish can be attached to the charm base, the brooch base, make a phone hanger, magnet, hairpins, use as a slingbus element (tie a bead), use as a counting material, material to study colors with young children, etc.

I use fish as a pendant for pens and pencils (at work, such pencils and pens remain on my desktop, and not “go” to the workplaces of my colleagues). 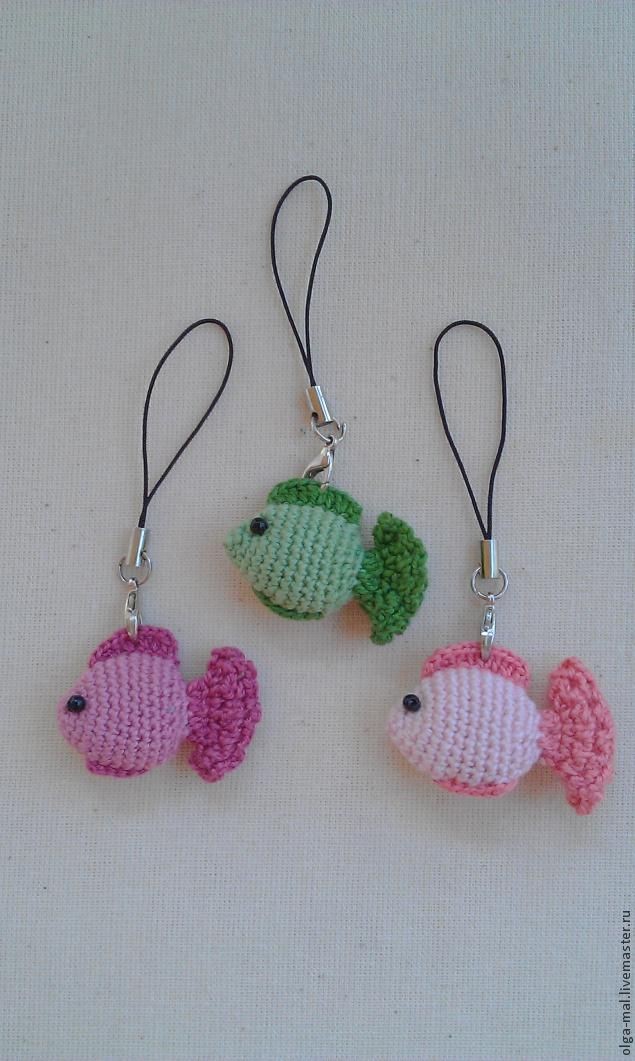 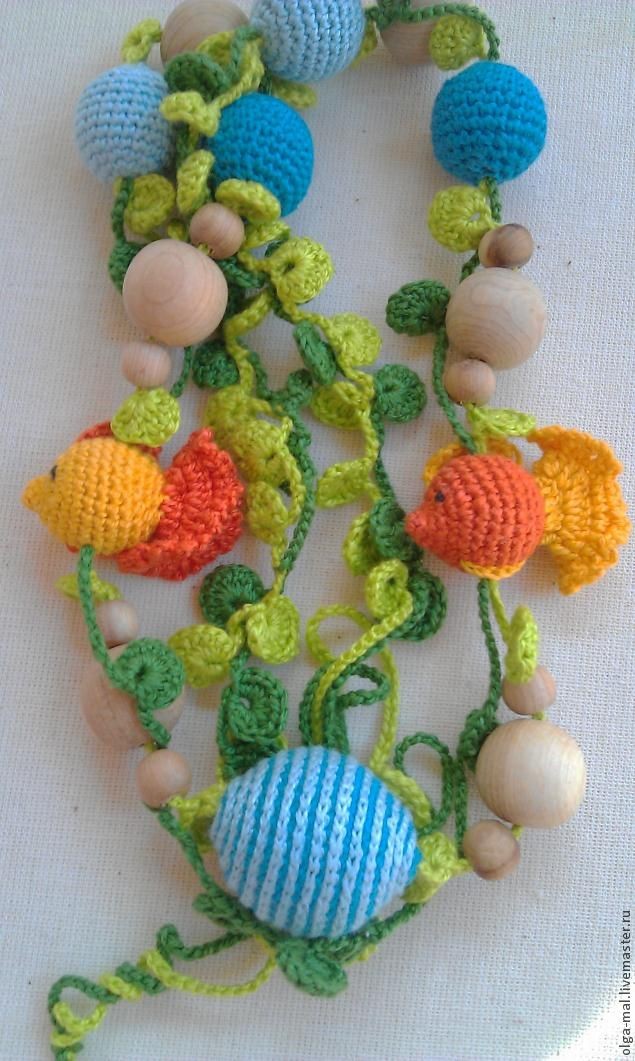