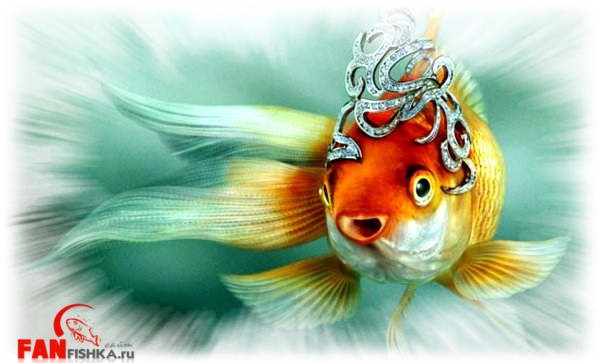 with photo, description and links

Sometimes it is even difficult for an experienced aquarist to tell what kind of fish it is. Hopefully, the following selection of GOLDEN FISH SPECIES will help you figure out who is swimming in your tank.

Aggressiveness: 5% are not aggressive, but they can bite each other.

Compatibility: with all peaceful and non aggressive fish.

Golden, or Chinese, crucian carp in nature lives in Korea, China and Japan.

The goldfish was bred in China more than 1,500 years ago, where it was bred in ponds and garden ponds on the estates of nobles and wealthy people. For the first time, a goldfish was imported to Russia in the middle of the 18th century.

Currently, there are many varieties of goldfish.

The color of the body and fins is red-golden, the back is darker than the abdomen. Other types of color: pale pink, red, white, black, black and blue, yellow, dark bronze, fiery red.

A goldfish has an elongated body, slightly compressed from the sides. Males can be distinguished from females only during the spawning period, when the female’s belly is rounded, and the males on the pectoral fins and gills develop a white “rash”.

For the maintenance of goldfish, an aquarium with a capacity of at least 50 liters per specimen is best suited.. Short-bodied goldfish (voiletails, telescopes) require more water than long-bodied (simple goldfish, comet, shubunkin), with the same body length.

With an increase in the volume of the aquarium, the planting density can be slightly increased. In particular, in the volume of 100 l you can settle two goldfish (you can have three, but in this case it will be necessary to organize a powerful filtration and make frequent water changes). 3-4 individuals can be planted in 150 l, 5-6 in 200 l, 6-8 in 250 l, etc.

This recommendation is relevant if we are talking about fish of at least 5-7 cm in size without taking into account the length of the tail fin.

A special feature of the goldfish is that it loves to rummage in the ground. As the soil is better to use coarse sand or pebbles, which are not so easily scattered fish. The aquarium itself should be spacious and species, with large-leaved plants.

Therefore, in an aquarium with goldfish, it is better to plant plants with hard leaves and a good root system.

In the general aquarium, goldfish can be kept along with calm fish. The necessary conditions for the aquarium are natural light, filtration and aeration.

If you feel unwell fish in the water, you can add salt, 5-7 g / l. It is advisable to regularly replace part of the volume of water.

Goldfish are unpretentious regarding feed. They eat quite a lot and willingly, so remember that it is better to underfeed the fish than to overfeed them. The amount of food given daily should not exceed 3% of the weight of the fish.

Adult fish are fed twice a day – early in the morning and in the evening.

Feed is given as much as they can eat in ten to twenty minutes, and the remnants of uneaten food should be removed. It is necessary to include both live, and vegetable food in their diet.

Adult fish that receive proper nutrition can endure a week-long hunger strike without harm. It must be remembered that when fed with dry food, they should be given in small portions several times a day, because when they get into a wet environment, in the fish’s esophagus, it swells up, increases significantly in size and can cause constipation and disruption of the normal functioning of the digestive organs of the fish, the consequence of which could be the death of the fish. To do this, you can first hold the dry food for some time (10 seconds – flakes, 20-30 seconds – granules) in water and only then give them to the fish.

When using specialized feeds you can improve the color of the fish (yellow, orange and red).

Long-bodied goldfish durable, under good conditions, they can live up to 30 – 35 years, short ones – up to 15 years. 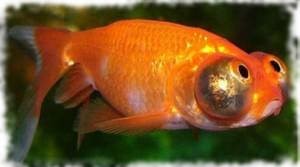 The astrologer has a round, ovoid body. A feature of the fish are its telescopic eyes directed slightly forward and upward.

Although this is considered a deviation from the ideal, these fish are very beautiful. Color stargazers orange-golden color. 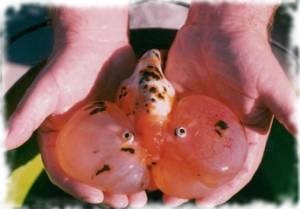 This fish is the result of the inexorable and merciless selection of Chinese goldfish. The size of the fish is 15-20 cm.

The most common are silver, orange and brown colors.
Read more about this Golden Fish here. Water eyes
Vualekhvost or Fantail 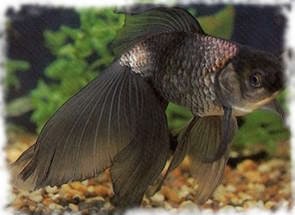 The veiltail has a short, high rounded egg-shaped body and large eyes. The head is big.

The color of the veil tail is different – from a monotonous golden color to bright red or black.
Read more about this Golden Fish here.
Everything about Veilhvostah
Pearl 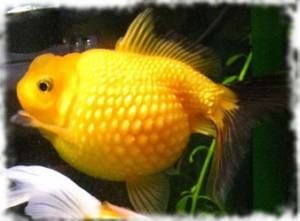 Pearl is one of the fish included in the so-called “Golden Fish” family. The fish is unusual and very beautiful.

Bred it in China.
Read more about this Golden Fish here. Pearl 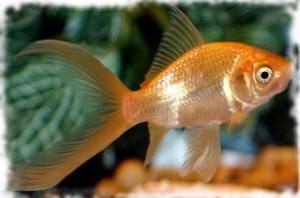 The body of the comet is elongated with a long ribbon forked tail fin. The higher the grade of the fish specimen, the longer its tail fin. 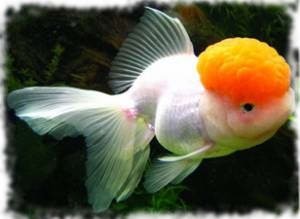 Oranda is one of the fish included in the so-called “Goldfish” family. The fish is unusual and very beautiful.

Orana differs from other goldfish – with a growth-cap on its head. The body, like many “Goldfish” ovoid, swollen.

In general, similar to the veiltail.
Read more about this Golden Fish here. Oranda 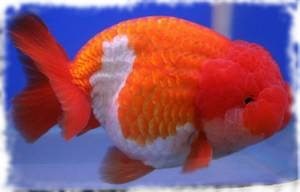 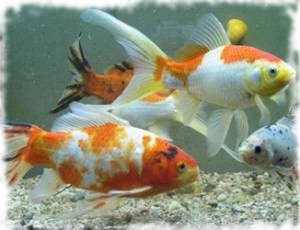 Another selection form of “Golden Fish”, derived in Japan. Suitable for maintenance in spacious aquariums, greenhouse and ornamental ponds. In Japanese pronunciation, its name sounds like sibunkin.

In Europe, the first fish appeared after World War I, from which it was imported into Russia and the Slavic countries.
Read more about this Golden Fish here. Shubunkin 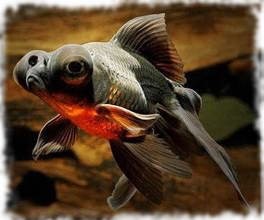 The telescope is one of the fish included in the so-called “Golden Fish” family. The fish is unusual and very beautiful.

Received its name for large bulging eyes, which may have a spherical, cylindrical or conical shape. Fish size up to 12cm.
Read more about this Golden Fish here. Telescope 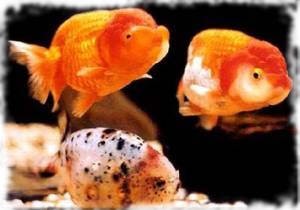 The fish is unusual and very beautiful. The fish has a short rounded torso.

The posterior profile of the back and the upper outer edge of the caudal fin form an acute angle. In the area of ​​the gill covers and the upper part of the head one can see volume growths that are formed in these fish at three months of age.
Read more about this Golden Fish here. Lionhead
Ryukin 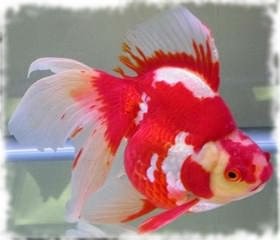 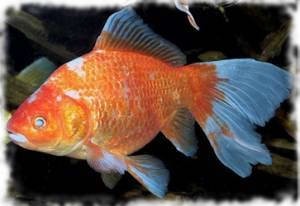 Goldfish (lat. Carassius auratus) is a freshwater fish of the carp family, of the Beaverguda order, of the Karas family. For the first time, goldfish were domesticated more than 1500 years ago in China.

They are direct descendants of gold crucians. Nowadays, many types of goldfish are popular pets that have many morphological characteristics.

The goldfish becomes mature at the age of 1 year, but if you plan to cross breeds, it is better to wait until it reaches a more mature age (4-5 years). In the wild, Karasiki spawns in the middle of spring. The readiness for spawning is determined by external signs: in the area of ​​gill covers hillocks appear of a light shade, the pectoral fins are characterized by small notches.

These features of appearance are peculiar to both males and females. The abdomen of females is rounded and increases in size.

The male begins to pursue the female, drives her into shallow water with dense vegetation. Therefore, simulating reproduction in the natural environment, the water level in the spawning tank is reduced to 15-20 cm. For a spawning aquarium, a capacity of 50-100 liters with aeration and good lighting is suitable.

In spawning you need to put a separator grid so that manufacturers do not eat fallen eggs. Planting of dense vegetation is allowed.

Spawning lasts 2-5 hours, after the process, the male and the female need to be deposited.

Look at the spawning goldfish.

In one year, goldfish can breed 2-3 times. Larvae of fry appear 2-6 days after fertilization, which depends on the temperature of the aquatic environment. The lighting speeds up the ripening process, and the shade stops.

In the first days of life, the larvae are almost stationary, fixed on aquatic plants, and eat up the contents of the yolk sac. After its exhaustion, the fry begin to swim independently in search of food.

Starter feed – Artemia nauplii, live dust, rotifers, special fry food. When the fry grow up, they need to be sorted by size, and settled in different tanks.

Tellingly, the descendants of beautiful parents may turn out to be plain and vice versa.

Today, the stores are small and large gold aquarium fish, short and long-bodied. And there are altogether very unusual fish from this family. Here are some representatives most often found in aquariums:

Comet. It has an elongated body with a ribbon forked tail.

And the longer its tail, the higher the assessment of the fish, the more pedigree it is. In general, the length of the tail should exceed the length of the body. Comets are even more appreciated, their body colors and fins are different.

Outwardly, such a goldfish resembles a voilehvosta. In content, it is unpretentious, quite active, but not particularly prolific. 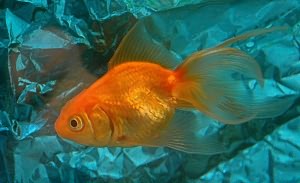 Opinions on this score are opposite. Some believe that this is a patient, practically unkillable, fish that survives in any conditions, suitable for beginners and people who do not want to invest in the aquarium a lot of effort and money.

Others, on the contrary, argue that the content of gold must comply with a number of fairly tough conditions, and they are no doubt right. A goldfish should not be started by someone who is not ready to make efforts for its comfortable existence.

And the most important condition for the maintenance of these fish is an aquarium of a sufficiently large volume. 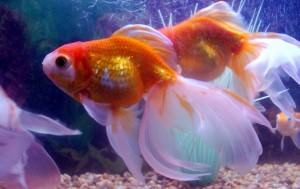 The answer to this question is unequivocal – the best option would be a specific aquarium where only goldfish live. Moreover, even short-bodied and long-bodied gold lodging is often not recommended together, but representatives of other species of fish are out of the question.

Either the neighbors will harass the scones, damaging their eyes and fins, or the neighbors themselves will be uncomfortable, as the aquarium with goldfish is a very peculiar habitat. In addition, small goldfish can simply swallow.